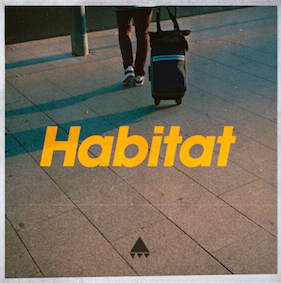 Following on from “About You” – the first release from their “Everything Is True” EP (out on 10th March 2017) – Danish trio AV AV AV (Phonetic translation – "Ow Ow Ow") pave the way into 2017 with their next single “Habitat” (as premiered by Complex UK).

"ELOQ", "Unkwon" and "DJ.E.D.D.E.H." are always inspired to make new music when they place themselves in isolated environments. There was no exception in the music making for their upcoming EP, where they have also chosen to flee to a summer hideaway to escape the noise of the city. "Habitat", which is the second single from this EP, embraces acoustic elements that blend together with electronic beats and multi-layered soundscapes.

In order to complete the acoustic elements, they received some help from ELOQ's dad Henrik Janson, who has composed and recorded a string arrangement that blends perfectly with the track. His musical résumé includes acts like Pink, Take That and Backstreet Boys. Besides this, he was also the composer of the string arrangement for the famous hit "Toxic" by Britney Spears.

"Habitat was created through a journey in sound, and when Henrik Janson recorded the cello on the track, we knew it was complete. We are all extremely proud of Habitat, and we think it is definitely a track that has shown us the direction in which we are headed with the entire AV AV AV project" The trio explains about the collaboration with Henrik Janson

The forthcoming music video for "Habitat" was made by the illustrator and film instructor Anders Morgenthaler, the collaboration discussed by AV AV AV below:

"We were contacted by Anders Morgenthaler who told us that he was in love with our music and wanted to visualise our expression. We felt extremely honoured that he wanted to make a music video for us. He's the man behind "Rocket Brothers"by Kashmir, probably the best animation music video ever made in Denmark.

The full process of the Habitat video has taken nearly two years because of the great deal of work it took to create the 3D animations. During this time we have simultaneously been working on the track. We felt we had to make the track even better every time we saw new video material from Anders and his crew. So in a way, the track and the video developed together through this process.”

As well as this, AV AV AV have a series of live performances in the pipeline too, including Frost Festival in Copenhagen on February 25th, By:Larm in Oslo in March,  and Spot Festival in Aarhus in May.

Staying true to their word, the electronic collective turn up the heat with ‘Habitat’ and continue to gear towards their goal of becoming one of the best live acts over the next few years.

About AV AV AV
AV AV AV had their debut in 2015 with the EP “They Live", which got a great deal of attention both in Denmark and internationally, with airplay on BBC's Radio 1 and complimentary words from the global producer Diplo, who referred to the music as "Future Gospel". The great interest the band received for their music resulted in sold out shows in Denmark and a sold out Club NME at KOKO in London, not to mention a list of other critically acclaimed concerts at both international and Danish festivals like By:Larm in Oslo, Sonár Reykjavik/Stockholm/Copenhagen, Spot Festival, Roskilde Festival, Tinderbox and Northside. Since then, lead single from their forthcoming ‘Everything Is True EP’ has been supported by BBC Radio 1’s Huw Stephens & Toddla T, as well as Brighton’s godfather of Dance, Fatboy Slim.