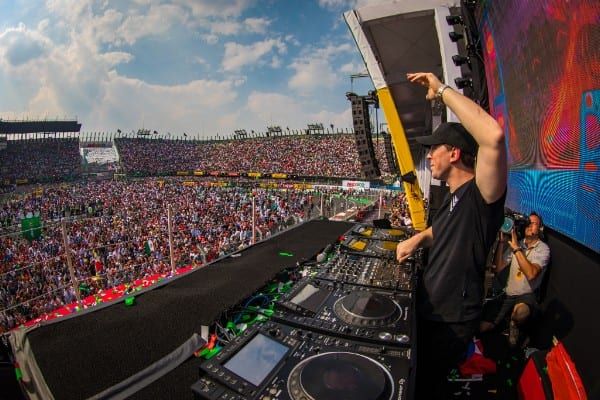 Hardwell continues to push the boundaries of achievement in the dance music world, as the two-time world’s #1 DJ performed the first ever DJ set to on a Formula One podium as part of Heineken’s More Than A Race campaign, to tens of thousands at this Sunday’s Formula 1 Gran Premio de Mexico, alongside millions of viewers, both motorsport and music fans, who tuned in to watch across the world.

Partnering up with Heineken’s More Than A Race campaign, the high-octane nature of the world’s fastest sport reflects Hardwell’s drive and unrelenting ambition, and was a match made in heaven with one of the world’s leading brands to close the Mexico Grand Prix with an unprecedented bang. After a year of unrivalled success for the Dutch supremo, which included a guest speaker invitation at the UN Headquarters in NYC to talk to delegates about the cultural impact of his ‘World’s Biggest Guestlist’event in Mumbai with his United We Are Foundation, Hardwell continues to break down walls across the globe with another DJ first, this time, performing at the Formula 1 Gran Premio de Mexico for what was a show-stopping hook up with Formula One andHeineken’s More Than A Race campaign. Fans were able to watch all the action on race day live via Hardwell’s Facebook page.

The stakes were already high heading into the weekend’s proceedings, with the Championship battle between Lewis Hamilton and Sebastian Vettel heating up. After a rocky start for both drivers following a collision in the first lap, the drama continued to unfold throughout the race with both Hamilton and Vettel having to chase the race from the back of the line – due to one car receiving a puncture and the other sustaining wing damage. However, ultimately the day belonged to Hamilton, who although finishing 9th still took away the biggest prize claiming his 4 drivers World Championship title (making him the most successful British driver all time). The race was won by Red Bull's Dutch driver Max Verstappen, who dominated from the front after taking the lead at the first corner, a move that led to the collision between Hamilton and Vettel. After a thrilling end to one of the most exciting races of the season, it was only fitting that the world’s biggest motorsport called in one of the world’s biggest DJ’s to celebrate such a monumental season. An expert in delivering on the big occasion, having DJed at many of the world’s biggest stages, Hardwell’s performance was perfectly placed to mirror the intensity of the action as he took reign of the makeshift DJ booth in the iconic F1 podium in Foro Sol after the drivers had taken their positions for the final ceremony. Midway through the performance Force India driver and Mexican native Sergio Pérez came out to joinHardwell on the podium stage and embrace the tens of thousands of fans partying below.

Reflecting on the opportunity, Hardwell said “Being asked to be a part of a world first for F1 was a very special feeling. It was an honour to be invited by Heineken and Formula 1 organisation to play an F1 podium for the first time in Grand Prix history. It was a thrill to be there on race day and I loved every minute playing for to the F1 fans in Mexico City on the Grand Prix on Sunday!”

Hans Erik Tuijt, Director, Global Heineken Sponsorship, said; “Hardwell’s performance on the podium at the Formula 1 Gran Premio de Mexico epitomises Heineken’s More than a Race campaign.  We’re aiming to open the sport up to fans globally, on the premise that F1 is not just a two-hour race, but a 72-hour spectacle of glamour and excitement taking place in some of the world’s greatest cities. Hardwell certainly lit up the post-race celebrations to the 50,000 strong crowd, plus the millions of fans watching it live on TV, Facebook LIVE and digital media all over the world.”