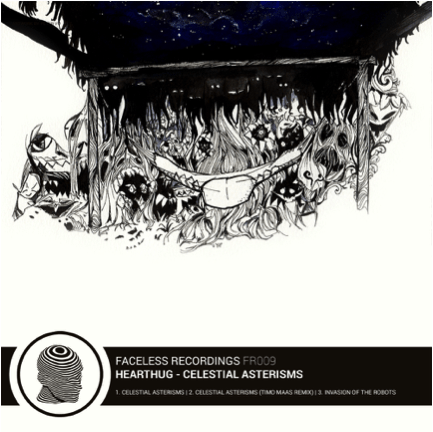 Faceless Recordings are set to return this June with an atmospheric three-track release from HearThug, featuring a remix from Timo Maas.

The latest international artist to hit the books of Faceless Recordings is Tunisia’s HearThuG – a producer with releases on My Favorite Robot, Sincopat and Stranjur that have each demonstrated his adaptability with styles ranging from upbeat, disco influences through to swirling atmospheric techno. Here we see HearThuG deliver some fresh original tracks and join the Faceless roster, slotting him in amongst James Teej, Climbers, Bambook and Jay Tripwire in the catalogue.

Droning synths, spacey samples and sombre piano chords adorn the tripped out, fifteen-minute instrumental voyage that is ‘Celestial Asterism’. The track keeps a steady vibe and pace as it subtly develops and evolves throughout, creating an introspective yet expansive opening number.

Legendary German producer Timo Maas delivers a remix to follow which has a more aggressive feel, gradually building with heavy tension, a steady house beat and throbbing with latent danger. The original’s droning hook is given an abrasive edge while industrial, metallic sounds invade across its eight and a half-minute duration.

The tension dissipates on closing cut ‘Invasion Of The Robots’, which has elements of cosmic disco and employs pulsing bass, motoric-like beats and major key chords to create a charming closing piece.