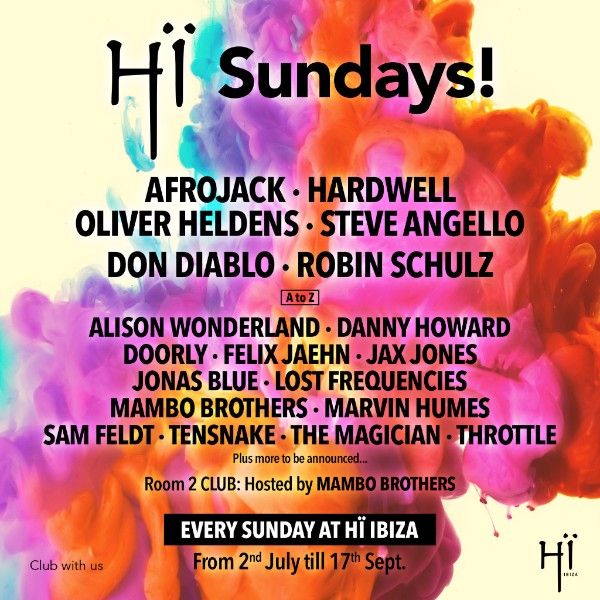 This summer Ibiza enters an exciting new chapter with the much-anticipated launch of Hï Ibiza, the brand new club by Ushuaïa Entertainment. The club formerly known as Space will be elevated to new heights, with a fresh new look and the most advanced sound and technologies on the island. Hï Sundays is the latest residency to be  unveiled, taking place every Sunday from 2nd July to 17th September, with big name acts like Afrojack, Hardwell, Oliver Heldens, and Steve Angello appearing regularly across the season in the Theatre (Room 1) and Ibiza stalwarts Mambo Brothers hosting the Club (Room 2).

Meanwhile over in The Club (Room 2), Ibiza legends Mambo Brothers will host each and every week, joined by an array of big name guests across the season including BBC Radio 1 DJ Danny Howard, Doorly, Jonas Blue, Kaz James, Marvin Humes, Tensnake and The Magician.

"I believe in being part of something from the start and that's what's happening now with Hï Ibiza. It's special to be included right from the first season that it's open. The location has great history, so I'm really proud to be part of the new chapter." – Oliver Heldens

With yet more acts still to be announced, including a selection of super special secret guests, watch this space for more news and book your place at Hï Sundays this summer at www.hiibiza.com.

About Hï Ibiza
Hï Ibiza, the club formerly known as Space, unites the highest standards of music and entertainment, bringing world-class music experiences to a club designed with the dancer in mind. This state of the art club will showcase the most exciting names in electronic music throughout the summer, from the biggest stars in the scene to the leading lights of the underground, continuing the island's legacy as the party capital of the world.

"Hi" is a small word that can be the beginning of a meaningful conversation or the start of a beautiful friendship that can lead to a bigger world of discovery. "Hi" is a welcome to a new era in Ibiza

The journey begins with 'Hï Ibiza'