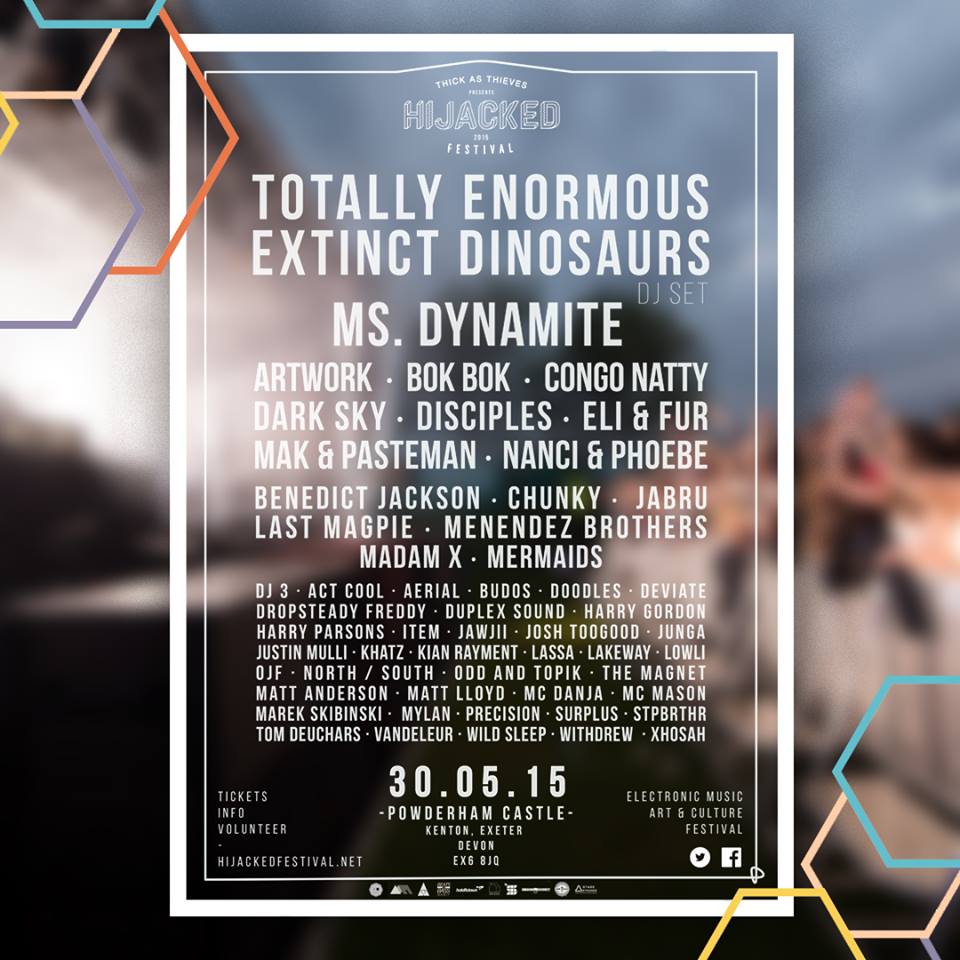 As we head into the final countdown to Saturday May 30th, electronic music, art and culture festival Hijacked Festival 2015 | Exeter has added even more music artists to the lineup, and announced an arts roster that really sets it apart from the crowd.

Immerse yourself in Hijacked Festival’s themed areas – a full immersive aquarium, 1970s jungle, dramatic and playful main stage and hunting bar – that transform the beautiful grounds of Exeter’s historic Powderham Castle. Or soar high above the site in Hijacked Festival’s hot air balloon. Explore the artist mural series and sculptures, where artists from around the UK showcase their work. Hijacked hosts one of the South West’s biggest murals, theatre performers, dancers and fairground rides.

Look out for Benedict Jackson, MC, DJ and producer Chunky, and Jabru, who promises to smash the ‘floor. House creative Last Magpie offers a genre-bashing set, party people The Menendez Brothers head, forward-thinker Madam X brings the bass, and disco-fueled duo MermaidS get involved, and there are so many more to check.

Download the Hijacked Festival companion app for full set times, and details on where each artist is playing – never miss a set. See the latest news and updates from Hijacked, plot your Hijacked journey with the smart map, and share across your socials. On-site beacons, located around the festival, will send special offers, updates and information to your smartphone – even if you don’t have signal. Download your Hijacked Festival app here.

The picturesque grounds of Powderham Castle, the 600-year old home of the Earl and Countess of Devon, which stands in a beautiful deer park on the banks of the Exe estuary, plays host to the city’s second visit from Hijacked Festival – the nomadic electronic music and creativity-embracing experience that ‘hijacks’ idyllic city locations. An intimate daytime party in an iconic city location – a hijack – the first Hijacked Festival event was a triumph, selling out, and 2015 will be even bigger.

Presenting an intimate daytime party in a picturesque inner-city location where electronic music takes the focus – a hijack – the first Hijacked Festival event was a triumph, selling out, and 2015 is set to be even bigger.