Hospitality In The Park – Finsbury Park 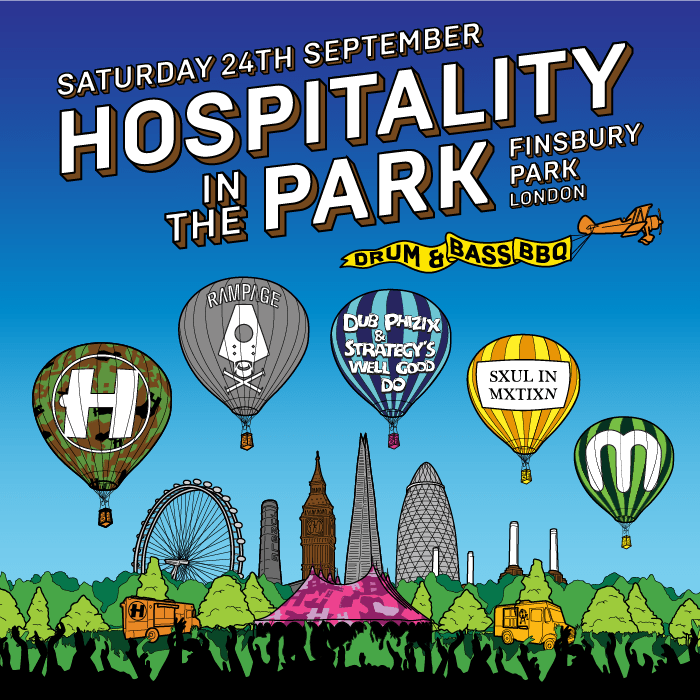 Hospitality In The Park – Finsbury Park

There’s nowhere more fitting to close the summer festival season than at Hospitality In The Park – the definitive drum & bass event hosted by Hospital Records’ worldwide reaching events brand Hospitality. This year the south London based, independent label celebrates 20 years in the game and to mark the occasion – for the first time in the history of the genre – a label will be throwing its own festival. A monumental achievement and an incredible step forward for their well-loved and pioneering events brand Hospitality. Throughout the day Hospitality In The Park promises to bring an incredible 360-degree selection of the biggest and best names in dance music’s most exciting and diverse genre.

Over the course of two action packed decades Hospital Records have led the way for drum & bass taking their energetic, feel-good policy on Hospitality tours around the world. They’ve reached as far and wide as Japan, the USA and Australia, sold out some of the biggest venues in the UK, including London’s O2 Academy Brixton, Building Six and Ministry of Sound, as well as annually hosting stage takeovers at festivals such as Glastonbury, Secret Garden Party and Bestival. Of course it’s the three sizzling sell-out Midsummer BBQs at Studio 338 that kickstarted the whole idea. Each crucial step has laid out the path to Hospitality In The Park – the next inevitable chapter taking place in Finsbury Park this September.

Leading the line-up announcements for this landmark event is label boss and head honcho Tony Colman AKA London Elektricity who for the very first time will be showcasing his London Elektricity Big Band. An entirely new concept featuring a 12-piece brass band from Riot Jazz, the return of legendary award-winning jazz singer Liane Carroll, newcomer Emer and Reprazent frontman MC Dynamite. All making for a totally unique performance and the only chance to see London Elektricity Big Band this year.

Looking ahead to the highly anticipated performance, London Elektricty says:
"The London Elekricity Big Band will be a world first – a 12 piece brass band, rhythm section and 3 vocalists playing drum & bass for an hour. This will be totally different to the old 'London Elektricity Live' from 2003. I couldn't and wouldn't have thought about doing this without Liane Carroll, who since we last performed together has won every single award going for best British jazz artist, but moreover she is simply the best living British vocalist in my opinion. We'll be cherry picking moments from the London Elekricity back catalogue, repping "Why Are We Here?" and a couple of surprise selections as well. Hospitality In The Park will be our first and quite possibly only show anywhere in the world this year. Oh I nearly forgot – I get to play bass in the band – that's one tick off of my bucket list!"

Hospitality in the Park is spread across multiple stages with the Hospitality main stage featuring household names from the past, present and future of the label. Artists appearing include the legendary High Contrast, Fred V & Grafix, S.P.Y and of course the return of Danny Byrd. There’ll be further performances throughout the day from Etherwood, Metrik, Maduk and the live spectacle of Gentleman's Dub Club. Expect the stage to be a mecca for diehard Hospital fans.

Rampage – Europe’s biggest drum & bass party and a cornerstone of the underground bass music scene across the continent – host their very own stage at Hospitality In The Park. Renowned for throwing the most incredible 15,000 capacity sell-out shows in Belgium, Rampage bring The Prototypes and The Upbeats to Finsbury Park with more acts announced over the coming weeks.

Taking over stage four is a before unseen but brilliant pairing of hosts. The UK’s finest midweek drum & bass night Soul In Motion, spearheaded by Bailey and Need for Mirrors, have joined forces with Med School – the sister label of Hospital Records and a major player in underground drum & bass who celebrate their 10th birthday this year. An incredibly dynamic line-up has been announced featuring the legendary LTJ Bukem, a B2B set from Hospital brothers Nu:Tone and Logistics as well as Keeno fresh of the back of his majestic second album ‘Futurist’. The longstanding duo SpectraSoul will go B2B with LSB as well as Anile taking to the stage. Two live acts have also been revealed: Frederic Robinson’s unique one-man show and following the release of their ‘Room 414’ LP, Med School’s Ukrainian five-piece band The Erised will make their highly-anticipated, premiere UK performance.

Representing the northern UK drum and bass contingent,  Radio 1 residents, Dub Phizix & Strategy bring their “Well Good Do’” to the north London field to host their own stage with lineup to be announced very soon. At least one other stage partner is set to be revealed in the coming weeks.

On top of all of the incredible music will be a mouth-watering selection of the tastiest menus from a range of independent London food vendors including Voodoo Rays, Earls Serious Sandwiches and a Tony Colman favourite The Cheese Truck. All will be on offer throughout the day, making for a totally unmissable event for any drum & bass fan and a perfect festival season finale in the 2016 calendar.

First Release tickets are on sale now: https://HospitalityInThePark.lnk.to/Tickets2016PR
For further information head over to: http://www.hospitalityinthepark.london/