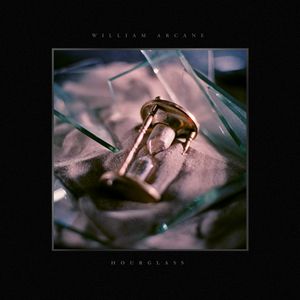 London-based artist/producer William Arcane has today announced the release of his 'Hourglass' EP – a four track collection of soulful, downtempo, pop songs written straight from the heart. Due for release on 29th November on Trace The Line Recordings, the first taster of the EP; 'Until I Forget' premiered today via Clash, who said "Unfolding gracefully, the sheer space on show is remarkable, with William Arcane's beautiful voice floating through the ether".

'Hourglass' shows Arcane laying his emotions bare. He had been living in London, working behind the scenes for other artists (he has been working with/producing for Nao, Rosie Lowe and Denai Moore of late, amongst others) and composing for film and television when a relationship he was in came to an end. He booked a small cottage on the Pembrokeshire coast in Wales and took himself away for three weeks in complete solitude, to let nature do its healing. It was there that he wrote this EP; 'Hourglass', which references the feeling that a window of time in which he had to reconcile his relationship was getting narrower and narrower. On writing the record, Arcane explains:

"Everything was written on the piano in Wales and then I brought the songs back to my studio in London. I was afraid to revisit them and do all the production work for a while because it was a tough place to re-visit. I nearly didn’t release them because they felt so personal and I thought it would make me very vulnerable, however I decided that everything would crystalize from releasing it for others to hopefully draw something from."

In his forthcoming EP, Arcane's trademark tender compositions are filled with soft-edged rhythms and textures. His delicate vocal sits atop innovative production, resulting in a bold and crisp, affective collection of songs.

With his last single 'Reflected' getting the nod of approval from Bonobo on his BBC Radio 1 Essential Mix and Jamie xx and John Talabot on their Space In Ibiza Mix, William Arcane has truly garnered respect and notoriety amongst his peers, and this next release promises the same reaction.

William Arcane's 'Hourglass' EP will be released on 29th November via Trace The Line Recordings. Track listing as follows: