Lucas & Steve x Brandy - I Could Be Wrong 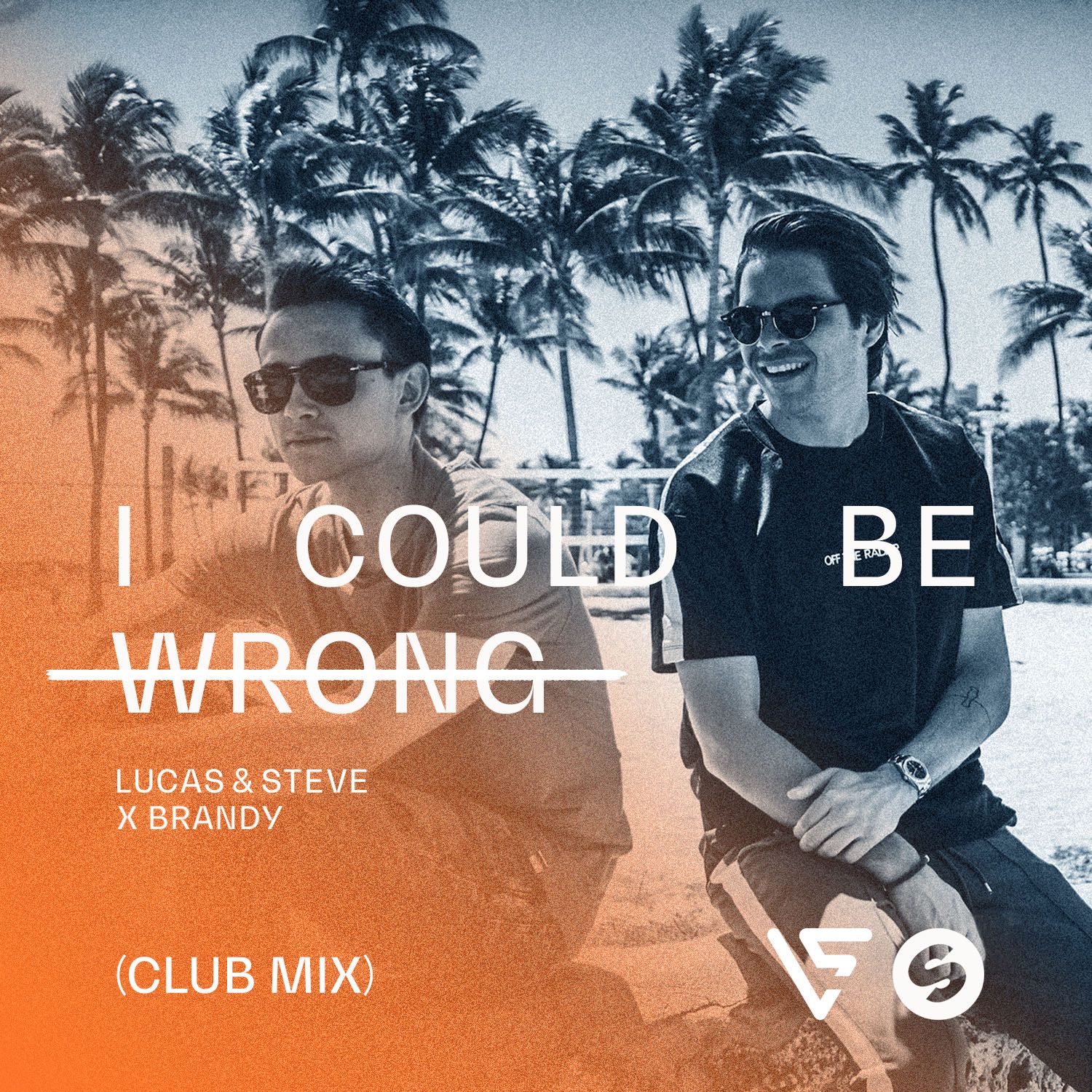 Lucas & Steve x Brandy - I Could Be Wrong

After scoring multiple hits, gracing some of the world's most acclaimed festival stages and making serious moves on the DJ Mag Top 100, currently holding the #64 position, Dutch duo Lucas & Steve now bring one of their most promising singles.

Teaming up with none other than US singer Brandy, the invigorating club tune 'I Could Be Wrong' is bound to go places this summer. Hot on the heels of early DJ support by the likes of Martin Garrix, Dimitri Vegas & Like Mike, Afrojack, Don Diablo, Lost Frequencies, and Robin Schulz, it's officially out now on Spinnin' Records.

Dutch duo Lucas & Steve have been leaving their mark on the scene for a while already. Being responsible for quite some festival crowd-pleasers, the guys made it big with last year's single 'Up Till Dawn (On The Move)',turning into one of summer 2017’s most favored tunes, counting over 27 million streams by now.

Meanwhile, they hit their most successful summer season ever in 2017, with performances  on Tomorrowland's mainstage, and Creamfields, as well as a headline set at London’s iconic Ministry of Sound Club, andAmsterdam Music Festival.

Asked by none other than Hardwell and KSHMR to remix their recent hit record 'Power', the guys were recently shining bright during the Miami Music Week, performing to a enthused, sold out Spinnin' Hotel. Early 2018 also saw them drop their much acclaimed collab with singer-songwriter Janieck, the club favorite 'You Don't Have To Like It', as well as the feelgood house track 'Source' – both receiving widespread DJ support.

And now, Lucas & Steve return for their definitive 2018 festival anthem, 'I Could Be Wrong'. For this, the guys are working with famed US singer Brandy, known from her internationally acclaimed hit singles 'The Boy Is Mine', 'Right Here' and 'Put It Down'. As the track builds on her 1994 debut single, worldwide hit 'I Wanna Be Down' it is stripped from its chilled groove, while staying true to Brandy's wonderful vocals.

This time round, the sultry R&B rhythms are reworked into a fresh 21st century dance production, featuring uplifting vibe and feelgood chords. The result is an uptempo crowd-pleaser, touching on contemporary vocal house and festival vibe, made for enthused DJ support, giving the original Brandy song an unexpected twist into the new dance era.

DJ support is already widespread, ranging from enthused support by BBC Radio 1's Mistajam to artists like Bob Sinclar, Felix Jaehn and many more, ahead of the duo’s upcoming performance at Belsonic Festival in Belfast.

“We've been fans of Brandy for so long!” said Lucas & Steve.

“Her voice is amazing, and it already caught our attention when our parents played her songs, back in the 90's. So of course it was a huge honor for us to be asked to work on one of her records. Our goal was to create an upbeat summer track, with the positive sound people are used from us, but also perfectly fitting Brandy's unique R&B voice. We feel we nailed it, and hope 'I Could Be Wrong' will turn into a summer soundtrack for many people!"