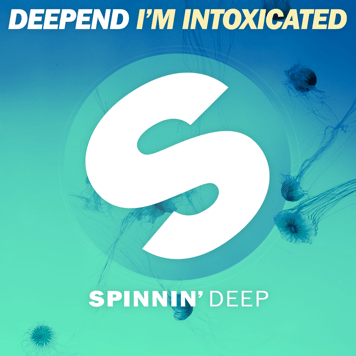 Dutch deep house duo Deepend is back! Still flying high on the wings of their landmark remix of Matt Simons 'Catch & Release', which turned into a worldwide hit last year, they now bring the official follow-up. 'I'm Intoxicated' is out now on Spinnin' Deep.

Deepend is the creation of two lifelong friends from the Dutch lowlands, working up impressive new sounds in house music for a couple of years already. This led to several popular bootlegs and releases on labels like Ultra, Armada and of course Pias, where they released last year's breakthrough hit, their remix of 'Catch & Release' by Matt Simons.

By now, the track's reached over a 100 million Spotify plays, while the video was streamed over 14 million times. So yeah, a sure shot remix, catapulting the young Deepend duo to infinite stardom.

'I'm Intoxicated'
And now, they're back. 'I'm Intoxicated' is their ideal summer tune, featuring bright sunny vocals and exciting chords, all packed in a perfect singalong house record. It's Deepend at its best, underscored by the DJ support it's received recently, ranging from Robin Schulz, Lost Frequencies, LVNDSCAPE and Joe Stone to Quintino, Gregor Salto, Hardsoul, Dante Klein, Mathieu Koss and many more.

Tasty house music, brought by the one of the most uprising acts of the moment. 'I'm Intoxicated' is out now through Spinnin' Deep.

Deepend quote:
"We’re super excited to finally share ‘I’m Intoxicated’ with the world. This track enables us to showcase a different side of Deepend. We don’t stick to a single genre and we’re happy to present you our clubby and uplifting side as follow-up for 'Catch & Release'. This track was born almost a year ago and it has all the elements we love. Uplifting piano chords, a deep and groovy bassline and catchy vocals. After road testing the track for several months, it’s safe to say that this track is one of the peak time moments during our DJ sets!"