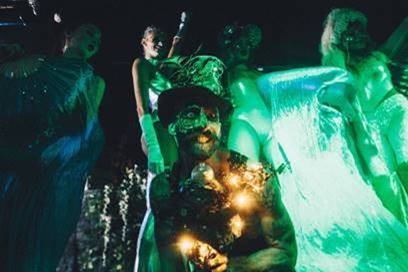 The bassline star will join the 16-date tour when it touches down in Torquay and Lincoln in February 2019. Be prepared for a night of immersive raving with Foreverland’s trademark killer production, bespoke stage designs, and weird and wonderful walkabout characters. Immaturity is advised!

The immersive club night Foreverland has announced that one-to-watch bassline DJ, Skepsis, will headline two dates on its ‘Enchanted Forest Rave’ tour. Alongside game-changing names from the worlds of garage and bass that includeJaguar Skills, DJ Luck & MC Neat, Artful Dodger and DJ Q, Skepsis will top the bill on 1st February 2019 at The Engine Shed in Lincoln and on 2nd February at The Foundry in Torquay. With a theme that will see each venue transformed into an enchanted forest for a night of alternative raving, it’s looking to be Foreverland’s most magical season yet. Super early bird tickets are now on sale from £10 plus booking from www.theforeverland.com/tickets.

Foreverland is one mini-festival environment that since 2015 has grown in popularity with the last tour peaking at 18 cities and 24,000 clubbers. The Enchanted Forest Rave theme pushes the envelope, even for a brand known for its wild taste in production. A custom-built stage-set resembling a crumbling, abandoned temple, laden with foliage will be the focal point at each venue. Plants and flowers will hang from the ceilings as walkabout characters and mythical beast puppeteers roam the dancefloor. L.E.D and pyrotechnic displays, inflatable creatures and dry ice and confetti cannons will transport dancers into another world. And if that’s not enough, face and body painting experts will be on hand to create eye-popping designs throughout the night.

One of bass music’s brightest young talents, Skepsis, joins The Enchanted Forest Rave at The Engine Shed in Lincoln (1 Feb) and The Foundry in Torquay (2 Feb). His gritty basslines and intricate rhythms have been unleased this summer at UK festivals including Boomtown, Parklife and SW4, in Ibiza at Together at Amnesia and across clubs during hisAustralian tour. Be prepared for carnage when he arrives at Foreverland!

No Foreverland party would be complete without its resident DJs, Taim, Bassic and Bitr8. They are the un-sung heroes of the dancefloor who get the crowds ripe for the headline sets and beyond with a mixture of all things electronic, bassline, garage, tech house and disco.

New for The Enchanted Forest Rave tour is MC Tyrone, better known as the hype man fronting garage collective, FooR. He’ll appear across the tour bringing his infectious energy and chants to the proceedings and even getting stuck in amongst the crowds on the dancefloor; a true talent.

Tickets can now be purchased for the super early bird price of £10 plus booking fee from www.theforeverland.com/tickets.

It’s clear this is shaping up to be Foreverland’s best season yet. Not only has the brand established itself with a no holds barred approach to immersive production, it’s also made impact on a musical level. It helped establish grime on the world stage due to early bookings with the likes of Stormzy and has played its part in the UK garage revival thanks to its on-point bookings with the likes of Flava D, Artful Dodger and Luck& Neat.