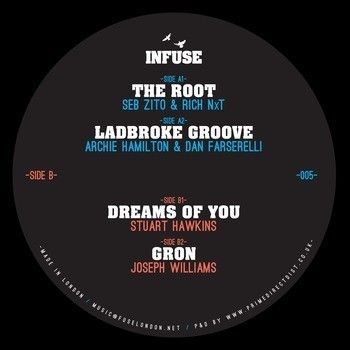 Lead track ‘The Root’ comes courtesy of FUSE’s trusted resident duo Seb Zito & Rich NxT. As expected the pair kick off the EP strongly with the hypnotically percussive groove of ‘The Root’ captivating the listener from the outset, with a warm incessant hum which is sure to send listeners into frenzy. Archie Hamilton & Dan Farserelli’s ‘Ladbroke Groove’ is another brutally simple yet efficient number, characterized by clever arrangement, crisp percussion and a wandering haze of melody.

‘Dreams Of You’ by Stuart Hawkins raises the temperature with a swinging beat and weighty bass complemented by shimmering melodies and a pitched vocal, resulting in a sonic blitz of the highest calibre. Joseph Williams rounds off the EP with an off-kilter punchy rhythm and fathoms deep sounds, perfect for any afterhours dancefloor.

The fifth installment of the Infuse series is a classy package and continues the strong tradition of previous Infuse releases of delivering expertly forged underground sounds catering for the more discerning head.