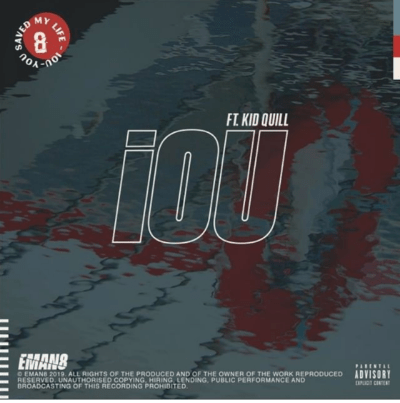 The multi-talented EMAN8 has released 'IOU', his thoroughly inspiring single that features Kid Quill and will undoubtedly bring further excitement ahead of his debut album.

After meeting on tour in 2017, EMAN8 and Kid Quill joined forces in the studio to record his verse on‘IOU’. The track is an affectionate and vibrant ode to those that have positively influenced EMAN8's life to this point, leaning on his heavy gospel influence to bring the track to life. Guided by strong piano keys and later accompanied by a soulful horn section, 'IOU' is likely to be a favorite due to its feel-good vibe.

The track was written as a testament to the incomparable strength of EMAN8’s longtime girlfriend, who despite losing her father, was a shining light in dark times. The track honors those who keep their head held high through it all not asking for anything in return.

'IOU' follows the recent release of EMAN8’s debut Billboard supported single ‘Amen’ as well as ‘Inspired’, which landed LA Weekly’s ‘Track of the Week’. EMAN8 continues to make waves in Los Angeles with a recent performance at music industry staple School Night, where he completely stole the show despite being billed as an opening act.

After earning his stripes within the music industry as Brandyn Burnette through songwriting for artists such as Bebe Rexha and Backstreet Boys, EMAN8 began his own journey which has led him to the quick success of his first singles under the new moniker. These triumphant efforts have provoked comparisons to the likes of Anderson.Paak and Chance The Rapper, who also pull from genres such as gospel and soul to create their unique interpretation.

EMAN8 focuses on intelligent, inventive storytelling and is preparing for a self-titled, self-produced album that is due in late Spring.