Audio Bully’s - It Was A Very Good Year 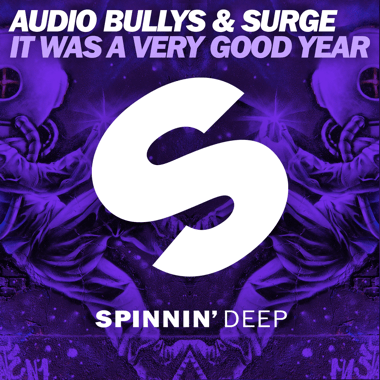 Audio Bully’s - It Was A Very Good Year

Audio Bullys is back and this time he teamed up with Surge. They’re kicking of with a vivacious intro enhanced by a storytelling vocal. Leading up to the drop they’ll surprise you with a strong big beat, melodic chords and a groovy bassline. One of those tracks that will definitely make sure 2016 is a very good year!

Audio Bullys is back with a brand new tune called ‘It Was A Very Good Year’. Formed back in the early 2000’s by Simon Franks and Tom Tinsdale from Richmond, South West London, Audio Bullys had their first hit with ‘We Don’t Care’ (2002), which currently still gets sampled.

“The name Audio bullys came to existence after a studio session where Tom and I were joking about bullying audio on the computer. We thought it had a ring to it and that’s how Audio Bullys was born.”, reminisces Simon.

Audio Bullys released their debut album ‘Ego War’ in 2003. This album was followed up by their second album ‘Generation’. The duo had their break through with their single ‘Shot You Down’ (2005) which sampled ‘Bang Bang (My Baby Shot Me Down)’ from Nancy Sinatra. ‘Shot You Down’ reached the #3 spot in the UK single chart. Their third and last album ‘Higher Than The Eiffel’ was released in 2010, 3 years prior to the moment that Tom Dinsdale decided to leave the group.

Simon Franks since than continued as Audio Bullys, playing live sets and producing music. Now Audio Bullys return with its new track ‘It Was A Very Good Year’.

“I first heard the song in the tv series The Sopranos years ago. I have always wanted to do a rework of this classic Frank Sinatra track. We played the original on New Years eve back in 2006 at a club called The Sands in Amsterdam, and it got a special reaction from the crowd.”, explains Simon.

For this version of ‘It Was A Very Good Year’, Audio Bullys teamed up with Surge. “It took us a long time and a good few different versions to get the cut right. We are all buzzing about the track coming out on Spinnin’ Deep. So 2016 is a very good year!!!”, continues Simon.

‘It Was A Very Good Year’ is already supported by Oliver Heldens, Showtek, R3hab, Kaskade, Bassjackers and more.

Audio Bully’s – ‘It Was A Very Good Year’ – Out Now on Spinnin’ Deep
https://spinnindeep.lnk.to/ItWasAVeryGoodYear