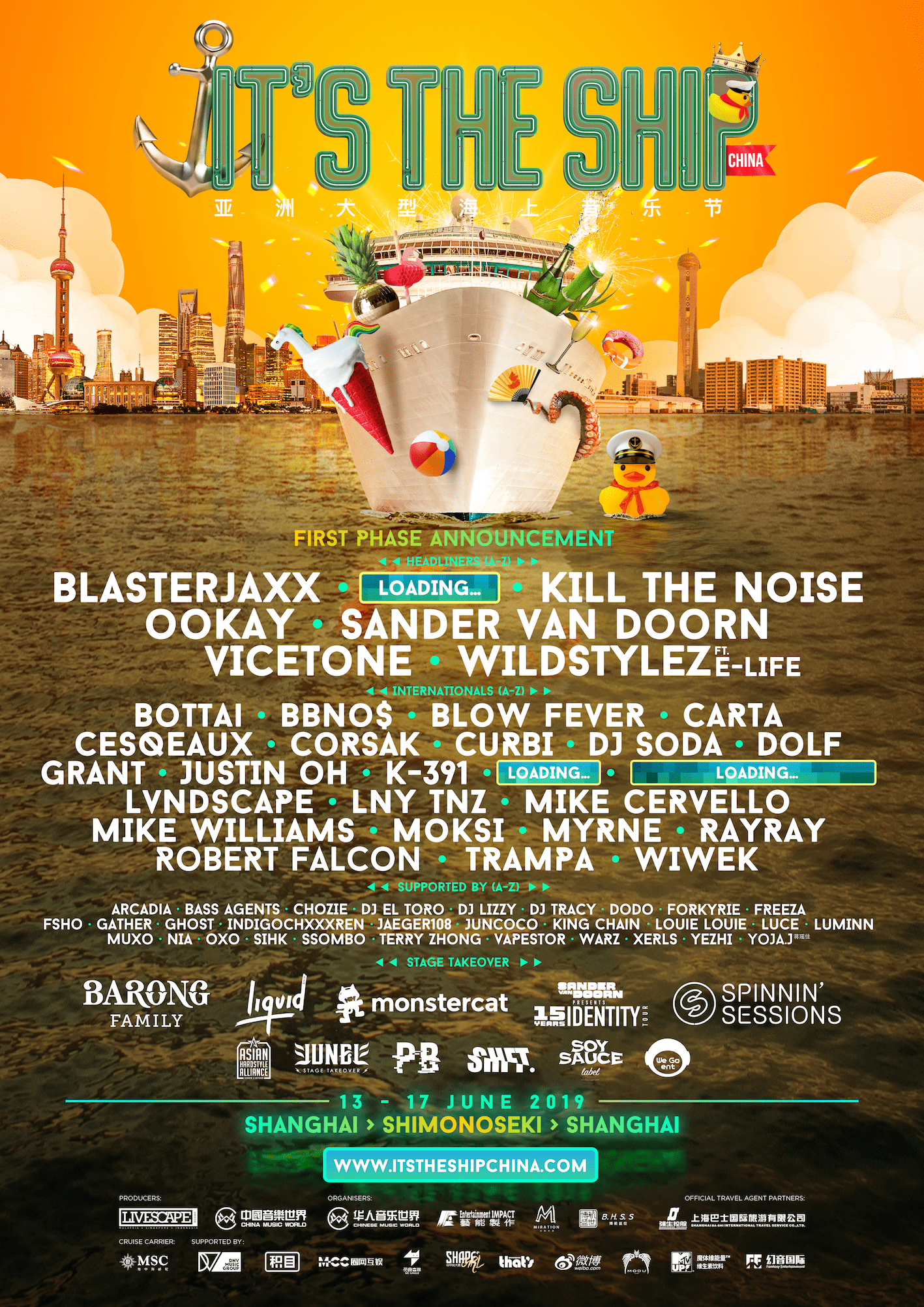 CHINA – The wait is finally over! IT’S THE SHIP China has announced the first phase lineup for its inaugural sailing from Shanghai to the island of Shimonoseki in Japan and back happening this 13th to 17th June 2019. With the unveiling of electrifying headliners including EDM DJ duo Blasterjaxx, iconic electro house DJ Sander Van Doorn, Dutch electronic DJ duo Vicetone, hardstyle DJ Wildstylez featuring MC E-Life, EDM DJ and record producer Kill The Noise, Ookay plus more artistes to be announced, IT’S THE SHIP China is set to provide shipmates worldwide an experience of a lifetime only made possible onboard the MSC Splendida.

Journeying from being relatively unknown producers to becoming one of the biggest acts in the EDM scene, Blasterjaxx will be taking over IT’S THE SHIP China’s first expedition with their signature killer drops and infectious melodies alongside world-renowned DJ, Sander Van Doorn. Ranking at #36 on the DJ Mag Top 100 poll, Vicetone are expected to take the festival to new heights after headlining various sold out festivals around the world. Best believe that the award-winning duo will also showcase their multiple Beatport Top 10 charting singles set to immerse shipmates in a dynamic experience. All in all, there are some solid inclusions in the lineup with another exciting headliner act to be announced soon.

Joram Metekohy, otherwise known by his stage name Wildstylez, is a Dutch hardstyle DJ and record producer ranked #85 on DJ Mag Top 100. Throughout his career in the hardstyle scene combining influences from techno and hardcore, Wildstylez has made numerous collaborations with other hardstyle artistes. Performing with him is rapper turned MC E-Life, who won best hip hop song for the 1997 TMF Awards that has since opened up several doors for him to perform with rap legends such as LL Cool J, Snoop Dogg, Ice Cube, the Wu-Tang Clan, Public Enemy, Blackstreet and Run DMC.

This inaugural sailing promises a unique shipcation made for festival-goers, adventure seekers and music enthusiasts around the globe. On top of that, each shipmate will be rewarded with an outré adventure throughout the 5-day 4-night journey that features various pop-up parties as well as a range of artiste-led side activities.

The Early Duck 2 promotion is available from now until the 15th of April, offering shipmates up to 17% discount off cabin prices. The rates are also inclusive of complimentary round-the-clock dining, non-alcoholic beverages and free access to most of the ship’s facilities. Don’t miss out on this promotion by purchasing your Early Duck 2 cabin here: www.galactix.asia/itstheship-china-2019