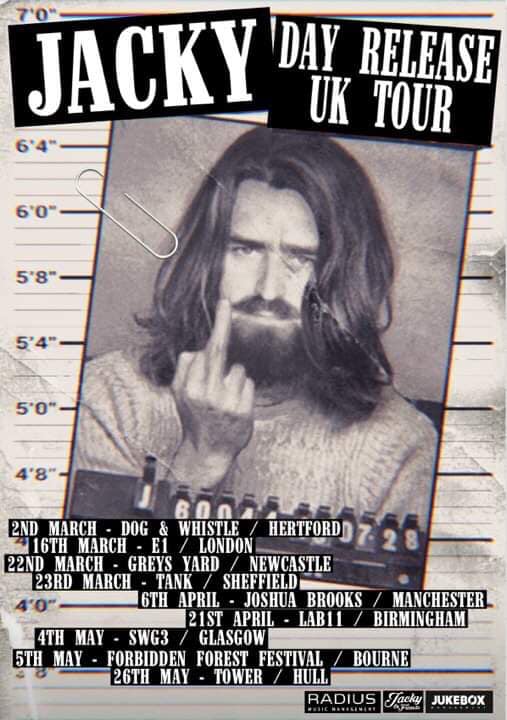 Geordie party starter Jacky is a wanted man. Whether that’s wanted for crimes against hair cuts or for what he can do to a dance floor is unknown, but either way he’s on the run. Departing from the Dog & Whistle in Hertford on March 2nd, he will aim to stay away from those on his tail until May 26th in Hull, with stops in Sheffield, Manchester, Glasgow, London, Birmingham, Newcastle, Bourne and Middlesborough along the way.

2019 has started brightly for Jacky. His newly minted Jacky & Friends label has served up some real heat from the likes of YINGYANG and Ren Phillips, Huxley and Kreature, while the man himself has continued to serve up fire on the dance floor, mostly on a 14 date tour of Australia where he played in Sydney, Melbourne, Christchurch NZ, Brisbane and Perth.

He’s been busy in the studio, too, with a new release coming on Repopulate Mars with Huxley in May, and will soon head to the USA for another tour before hitting up Ibiza for another busy summer schedule with news of that to come.

The tour stops at plenty of the county’s best clubs including the likes of E1 in London, Tank in Sheffield, Joshua Brooks in Manchester, Lab 11 in Birmingham, SWG3 in Glasgow and Bourne’s Forbidden Forest Festival and plenty more.

These dates are the last chances to catch Jacky this season before he heads off to terrorise the rest of the world, so get yours locked in now.