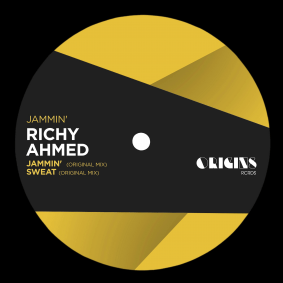 Richy Ahmed makes his debut appearance on Josh Butler’s ORIGINS RCRDS this December to round out 2018 with his ‘Jammin’ EP.

An artist firmly at the forefront of house music, with previous releases on the likes of Seth Troxler’s Play It Say It, Knee Deep In Sound, Crosstown Rebels and of course Hot Creations, Richy Ahmed’s reputation as one of the worlds finest DJs and producers has most definitely been confirmed in 2018. A White Isle favourite, holding down and fronting one of Ibiza’s most prestigious residencies for Paradise at DC-10, his position as one of the UK’s most notable electronic music artists reached new heights in 2016 following the launch of his own label Four Thirty Two. Having made an appearance within ORIGINS RCRDS boss Josh Butler’s BBC Radio 1 Essential Mix this summer, here we see the Paradise regular release his highly anticipated two tracker entitled ‘Jammin’, which looks set to become an essential EP for many through the New Year and beyond.

Title cut ‘Jammin’ opens proceedings to unveil an up-front production typical of the UK talent as bright, resonant piano chords go to work over infectious vocal hooks and shuffling organic percussion to form a dynamic and driving peak time production that oozes energy from the off. On the flip, the stripped back yet bumping ‘Sweat’ skillfully fuses crisp analogue drum licks, skipping hats and a snaking groove line to reveal a slick b-side roller for those looking to keep crowds moving long into the afterhours.