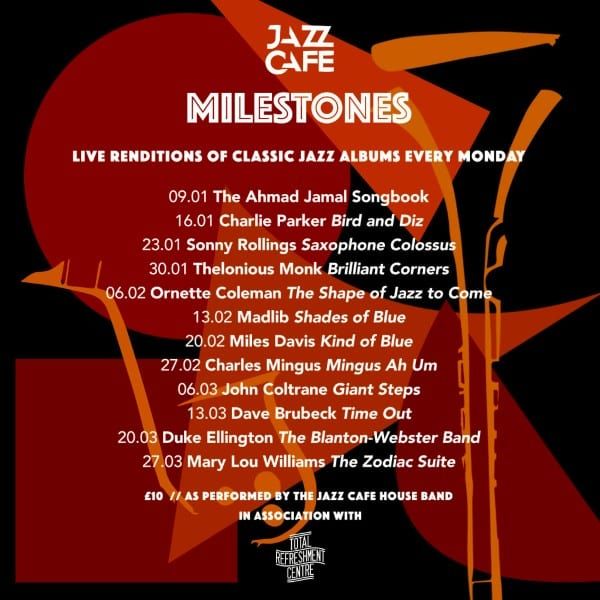 The Jazz Café are teaming up with Total Refreshment Centre to launch a new live series – assembling a selection of their favourite musicians currently contributing to London’s jazz scene, they’re set to celebrate some of the genre’s greatest albums. Taking place across 12 Mondays from January, they’ll reinvent and reinterpret the likes of Charles Mingus, Dave Brubeck, Charlie Parker and John Coltrane.

While much has been said about the growing popularity of jazz in the city, little attention has been given to the musicians currently contributing to London’s own scene. As part of their Milestones series, The Jazz Café will bridge the gap between the classic and the contemporary, presenting 12 seminal albums that continue to inspire some of finest players of today. Important waypoints in the evolution of the genre, these records are foundational to many of the sounds being explored by the city’s young, progressive jazz musicians.

A selection of some of the finest players currently contributing to London’s contemporary jazz scene, the band features a revolving line-up of players – Ashley Henry (of Ashley Henry Trio) keys, Nubya Garcia (of Theon Cross Trio) saxophone and Nick Walters (of Ruby Rushton and Riot Jazz) the Trumpet. There will also be appearances from a few special names who've recently graced the Jazz Cafe stage.

Each Monday for 12 weeks they’ll take on a new album, reinterpreting and reinventing it for the present day. Reflecting the traditional jazz environment, each of the shows will be experienced in a restaurant setting, with additional seating being added to the lower level of the venue.

09.01 – The Ahmad Jamal Songbook
Led by TRC – whose Songbook series has seen Yussef Kamaal play the music of Idris Muhammed and Moses Boyd covering Art Blakey – Milestones launches with an all-star excursion into the music of Ahmad Jamal.

23.01 – Sonny Rollins – Saxaphone Colossus
A milestone for Rollins, and the genre as a whole, this album helped establish him as a prominent artist and is considered one of the finest jazz albums of all time.

30.01 – Thelonious Monk – Brilliant Corners
Incredibly complex, the album’s title track is seen as one of Monk’s most difficult compositions and the peak of his artistic output.

06.02 – Ornette Coleman – The Shape of Jazz to Come
The title of the LP was intended to point to its “uniqueness”. Coining the term “harmolodic”, Coleman created a sound that combined harmony, movement and melody.

20.02 – Miles Davis – Kind of Blue
Regarded by many as the greatest jazz record ever made, Davis’s masterpiece LP Kind of Blues has greatly influenced music of all genres.

27.02 – Charles Mingus – Mingus ah um
A “tribute to ancestors”, the album nods to many of Mingus’s musical forebears. Gospel, boogie and bebop are all alluded to in this through jazz styles.

06.03 – John Coltrane – Giant steps
An iconic record, many of the tracks on this album have become practice templates for jazz saxophonists.

13.03 – Dave Brubeck – Time Out
With its unusual time signatures and cool West Coast feel, the album and the seminal track “Take Five” catapulted jazz into the billboard charts.

20.03 – Duke Ellington – The Blanton-Webster band
Once described as a “series of individual triumphs from the greatest team of jazz players ever assembled".

27.03 – Mary Lou Williams – The Zodiac Suite
The writer behind hundreds of arrangements and mentor to many of the greats included in this programme, the music of Mary Lou Williams “the first lady of the Jazz Keyboard” is a fitting close to the series.

Tickets are £10, with food priced separately as per the menu.

Tickets can be purchased via the Jazz Café website: http://thejazzcafelondon.com/milestones