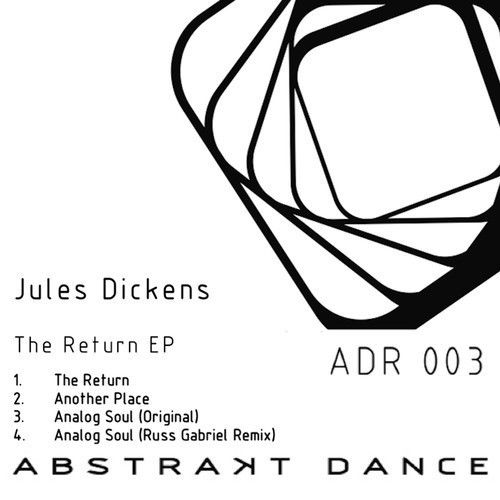 The third instalment from Colin Dale and Jules Dickens’ Abstrakt Dance imprint, which was launched last summer is ‘The Return EP’ by Jules Dickens featuring a remix by Russ Gabriel.

Jules Dickens, renowned for his production work as Abstract Source, is a London based DJ and producer, as well as a studio owner and teacher.  So, quite the busy man!  But here, he takes time out from this hectic schedule to present his first release for Abstrakt Dance.

‘The Return EP’ opens with the Detroit-esque piano of the title track with its thumping bassline under layers of claps, cymbals and dappled electronics.  The deepness of ‘Another Place’ follows, where a smooth groove meets washes of synth work and cool, housey beats before the melancholy melodies and acid-tinged effect of ‘Analog Soul’, the last of Jules’ original three workings takes hold.

The release ends in a flourish from Techno heavyweight Russ Gabriel who (for anyone who’s been in a coma since the 90s!) has had releases on Planet-E, Peacefrog, Soma and his own highly respected Ferox label amongst others, with more recent outings on the likes of Mobilee and Pokerflat to his name.  His characteristic remix on ‘Analog Soul’ ends this quality EP in fine style, proving why this influential artist is still in such high demand.

‘The Return EP’ by Jules Dickens is out now on Abstrakt Dance (http://abstraktdance.co.uk)