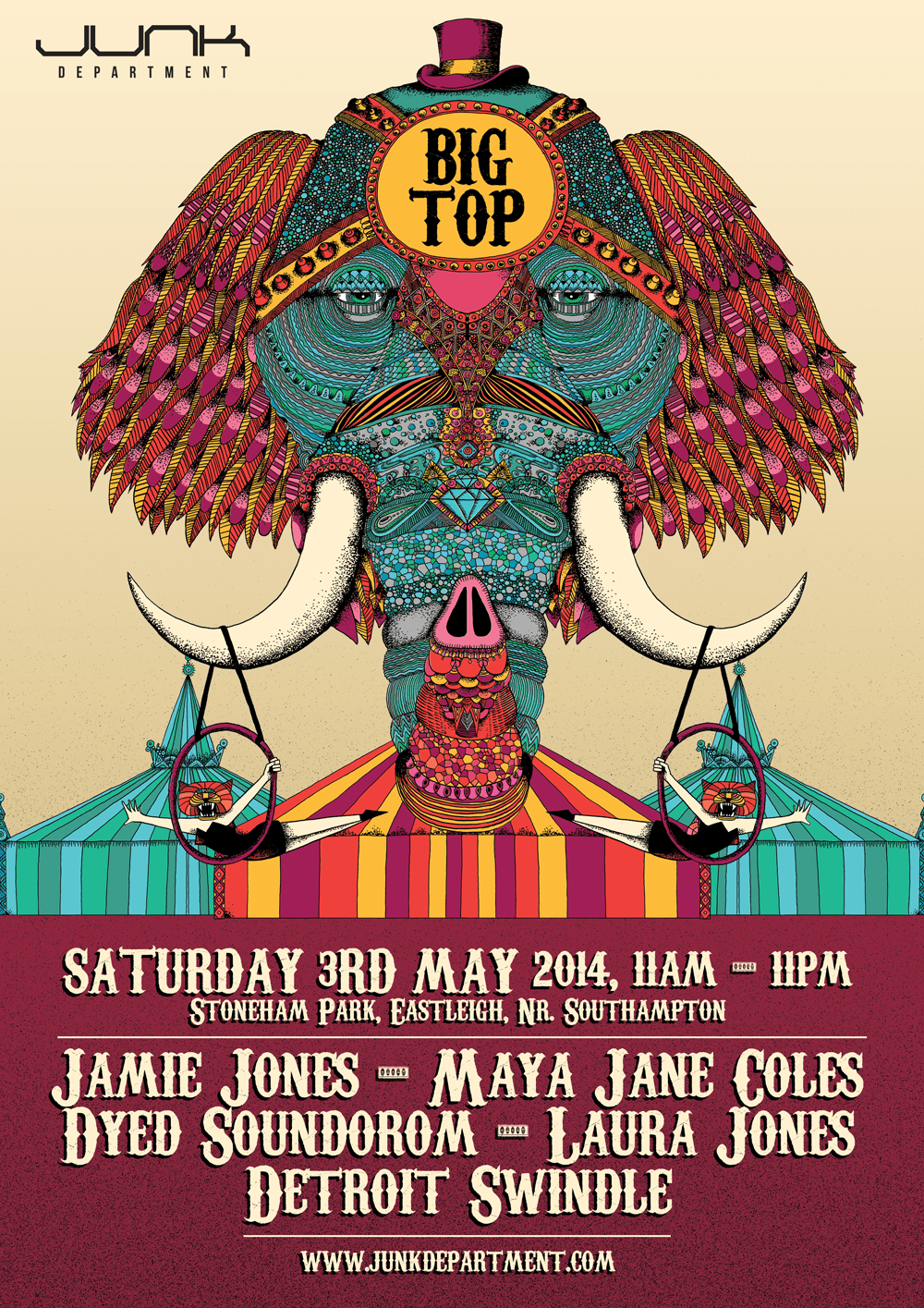 Having spent the last decade as an integral force shaping the South Coast music scene, Junk Department reveal game changing plans for their next chapter. On Saturday 3rd May they pitch up at Hampshire’s Stoneham Park with a bonafide circus big top that will play host to some of electronic music’s hottest talents, unleashing twelve hours of dancefloor pounding sets from the likes of Jamie Jones, Maya Jane Coles, Dyed Soundorom, Laura Jones and Detroit Swindle for the biggest party the South has ever seen.

Topping the bill is Jamie Jones, infamous founder of this decades inescapable house institution, Hot Creations and one quarter of smash-hit live act Hot Natured. From humble beginnings playing after hours sessions in dark basements of London’s underground scene to headlining some of the biggest festivals around the globe including Sonar, Movement Detroit and Eastern Electrics JJ’s meteoric rise to fame is something for the history books. First spinning tunes for Junk back in 2009 it is with immeasurable excitement they welcome the return of the world dominating Jamie Jones to their line up.

Joining the deep house juggernaut is pint-sized producer Maya Jane Coles. The past three years have seen her rising up through the house rankings from underground sensation to global star. Her hotly anticipated debut album ‘Comfort’ was released last summer to rave reviews, yielding two of 2013’s biggest dancefloor anthems ‘Everything’ and ‘Burning Bright’.

Adding his distinctive sound to the mix is one-third Apollonian, one hundred percent underground maestro, Dyed Soundorom. Having carved a fierce reputation for deep, disco tinged productions, his label Apollonia which he runs in partnership with fellow Frenchmen Shonky and Dan Ghenacia has quickly become one of the most relevant outputs in today’s underground music culture.

Laura Jones is another lady not to be messed with. Not even three years strong into her career and already a name that resonates across the globe, her contributions to some of the most exciting labels including Visionquest and Leftroom have, in a matter of months, helped to solidify her position as one of the hottest artists on the scene right now, with regular slots at Circoloco @ DC10 and Fabric.

Joining the hefty programme of house elite are the fresh talents of Detroit Swindle. The honoree Detroiters-via-Amsterdam duo who have already played at some of the world’s most respected venues in the form of Berlin’s Tresor and Panorama Bar with tracks on their own Heist Recordings as well as Tsuba, Freerange and Dirt Crew.

In typical Junk Department style, the 5000 capacity circus big top will feature excellent production, sound and lighting as well as numerous bars and food outlets, professionally managed toilet facilities and a full fun fair making for one hell of a start to the summer!

Junk Departments Big Top marks the start of a new chapter in Junk’s story. One that will see them expand beyond the shores of their beloved Southampton to stage some of 2014’s most exciting events at music meccas around the world including Ibiza, Amsterdam, Berlin and London. Remain vigilant for further details coming in then next few weeks and month…