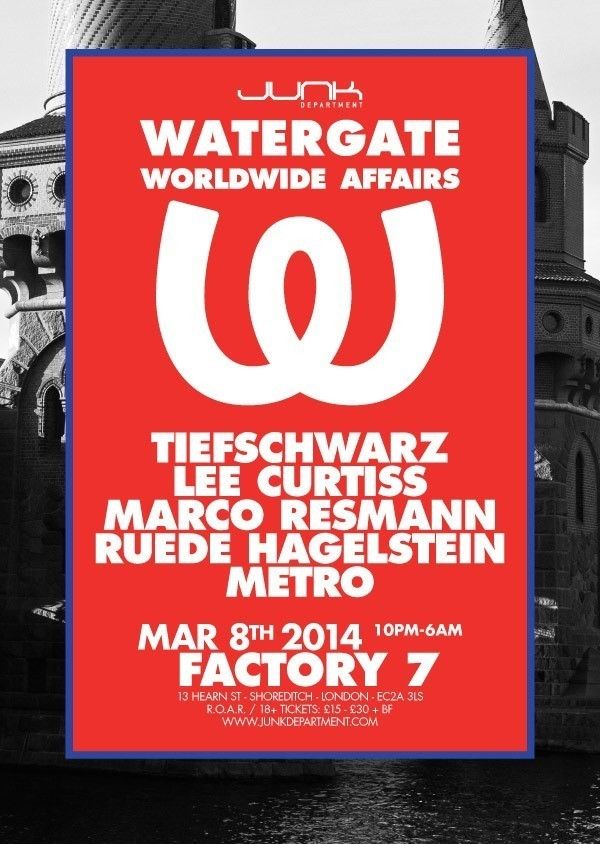 Junk Department kick of their 2014 series of events with a party in Shoreditch’s Factory 7 warehouse on the 8th March. With an Anglo-German approach Junk Department will march to London’s East End with Berlin’s Watergate crew to present a jaw-busting line up in an intimate space for up to 1000 revelers with an emphasis on great sound, great production and a party to be talked about for years.

Focusing on Watergate album releases the line up for this party brings together a strong crop of DJs as versatile and dynamic as any other. Topping the bill are Berlin legends of tech-house Tiefschwarz alongside Visionquest’s Lee Curtiss, both of whom will be making their first London showings for 2014. Watergate resident’s Marco Resmann and Ruede Hagelstein share the 3rd and 4th spots respectively. Ruede Hagelstein, having mixed the 14th edition of Watergate’s compilation series, brings an exciting, forward thinking edge to the party while the main man behind the famous brand Metro lies aptly as the foundations of the line up.