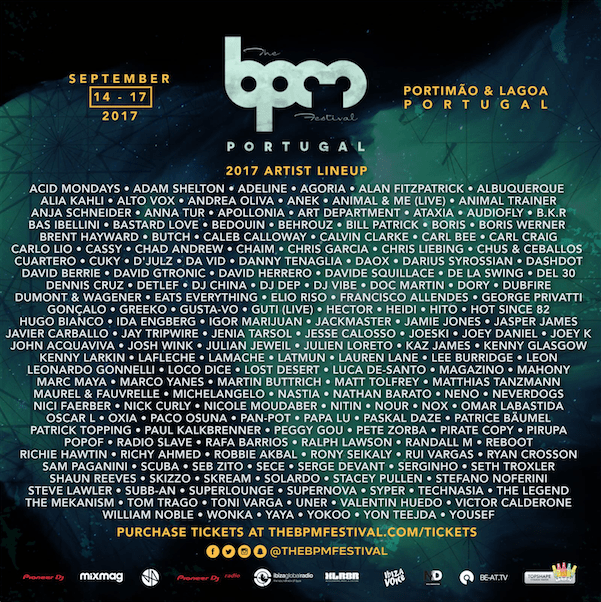 There is now just under one month to go until the long-awaited European debut of The BPM Festival. Taking place in Portugal on 14th – 17th September, the festival’s inaugural edition will see the picturesque coastal towns of Portimão and Lagoatransformed into an exploration of underground electronic music; welcoming over 160 artists from across the globe and 25 branded showcases.

With The BPM Festival: Portugal featuring world renowned DJs such as Apollonia, Jamie Jones, Lee Burridge, Nicole Moudaber, Paul Kalkbrenner, Seth Troxler, Skream, Stacey Pullen, and many more, the festival bill also includes a huge selection of up and coming talents – a platform that The BPM Festival has become renowned for during its 10 year trajectory. A chance for many fresh faces to shine on a larger stage, with local Portuguese residents included in the 2017 line-up plus fast rising names includingBoris Werner, Lauren Lane, The Mekanism and Detlef.

Also integral to The BPM Festival’s longstanding success is its impressive selection of brand showcases. Bringing the same varied portfolio of parties from its previous editions into Portugal, the festival will see 25 cutting edge takeovers take place across the four-days that each represent electronic music’s global appeal. Spread over six venues in the adjacent coastal municipalities of Portimão and Lagoa, takeovers include globe-trotting party brand Paradise, Lee Burridge’s All Day I Dream, Hector’s Vatos Locos collective, Brazil’s Warung hosted by Ibiza Voice and many more. As the night falls, Portimão’s main pedestrian walkway of Avenida Tomás Cabreira will be lit up with events from Popof’sFORM Music, Don’t Be Leftout with Visionquest hosted by XLR8R and to name a few.  The BPM Festival’s crown jewel YA’AH MUUL will also be present at Lagoa’s Centro de Congressos do Arade, alongside Ibiza’s infamous ANTS colony amongst others.

As finishing touches are being made, final names for The BPM Festival’s first expansion move into Europe include Danish duo Anek plus Kaz James, Carl Bee and Victor Calderone – setting itself up as a solid addition to this year’s festival calendar. Tier 3 passes are available via The BPM Festival’s website, while the festival has teamed up with Choice Holidays to offer accommodation-only and package options. Packages include flights, accommodation, airport transfers & festival tickets. Choice Holidays is also a member of the ABTA, and ATOL bonded. This means you can book in confidence through an insured company.  The packages are very flexible, offering thousands of flights from anywhere around the world. There are also various hotel options to suit your budget and preferences.