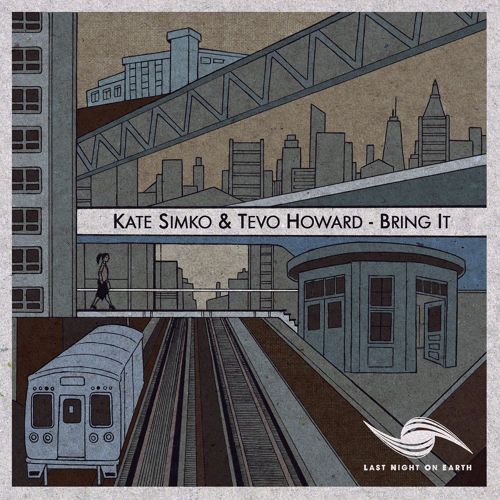 Kate Simko and Tevo Howard rejoin forces with a new single, ‘Bring It’, from their upcoming album on Sasha’s label Last Night On Earth.

Native Chicagoans, Tevo and Kate grew up on house music, and their collaboration pays homage to their home city while exploring new ideas outside the limitations of genre boxes. The forthcoming album, ‘PolyRhythmic’, is a masterfully crafted production from two of the current days most dedicated purveyors of Chicago house music.

“Bring It was a track I made for Movement Festival in Detroit a few years back, and it has very Detroit-influenced chords.  It became a staple in my live set, and then Tevo added the 303 bass line and classic Roland drums to bring in an old school feeling.” – Kate Simko

Both Kate and Tevo’s heritage shines brightly through ‘Bring it’. Their equally passionate devotions to music started at young ages. Tevo, a bassist who started mixing records in the late eighties, coupled with Kate’s love of piano and house music, makes this a completely natural pairing.  ‘Bring it’ foreshadows the essence of ‘PolyRhythmic’, an album that fuses modern inspirations with the classic sounds of house music.

The vocal version of ‘Bring It’ was re-crafted last summer in New York at Butcha Sound Studios with vocalist Amunet Shah. Also enamored by house music, Shah created raw and authentic NYC-style vocals. Kate and Tevo’s new school American sound shines through on this standout production from the album, fusing together elements from Detroit, New York and Chicago house music. The addition of Tevo Howard’s Roland-303 baselines perfectly capture and elevate the classic sound of Chicago. A menacing yet melodic sound that highlights the ‘PolyRhythmic’ project perfectly, A classic sound with a contemporary twist.

‘This will be a larger page to open the door to the statement in sound that PolyRhythmic first set out to make through many ideas shared by us as artists’ – Tevo Howard. ‘Bring it’ paves the way for Kate and Tevo’s long-play album ‘PolyRhythmic’.

This single opens the door and invites listeners into their platform for experimentation in house music.  This exceptional production from the album is a chance for Kate and Tevo to stay true to their musical roots whilst exploring broader creative horizons.