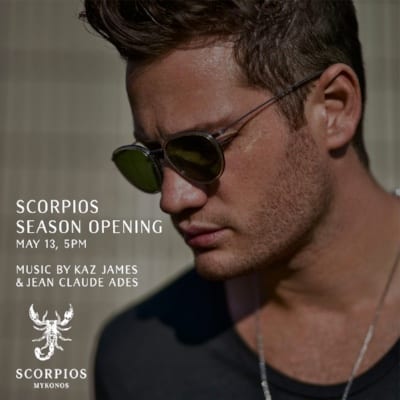 Australian producer Kaz James will be returning to the beautiful beach club Scorpios Mykonos in Greece this summer for the third consecutive year. Hailed as the world’s number one beach club, Kaz will be headlining every Sunday for the biggest night on the island, often attracting 3500 people a week. “Everyone on the island meets at Scorpios on a Sunday, it’s like a family of party heads – a tribe”, explains Kaz.

Taking place from the 13th May till the 21st October, Kaz will be playing alongside some of the finest local talent, performing his signature spellbinding set.  Known for playing brooding, rugged beats, Kaz creates the perfect soundtrack for those hedonistic island nights, mixing between house, techno and disco, setting the mood between sunset and sunrise.

Providing an atmosphere for laidback etiquette, Scorpios is decorated with bohemian interior using the natural details surrounding the location to their full potential. Providing day time activities such as yoga, rituals and sound baths, Scorpios provides a full 360 experience with an outstanding Mediterranean menu on offer throughout the day.