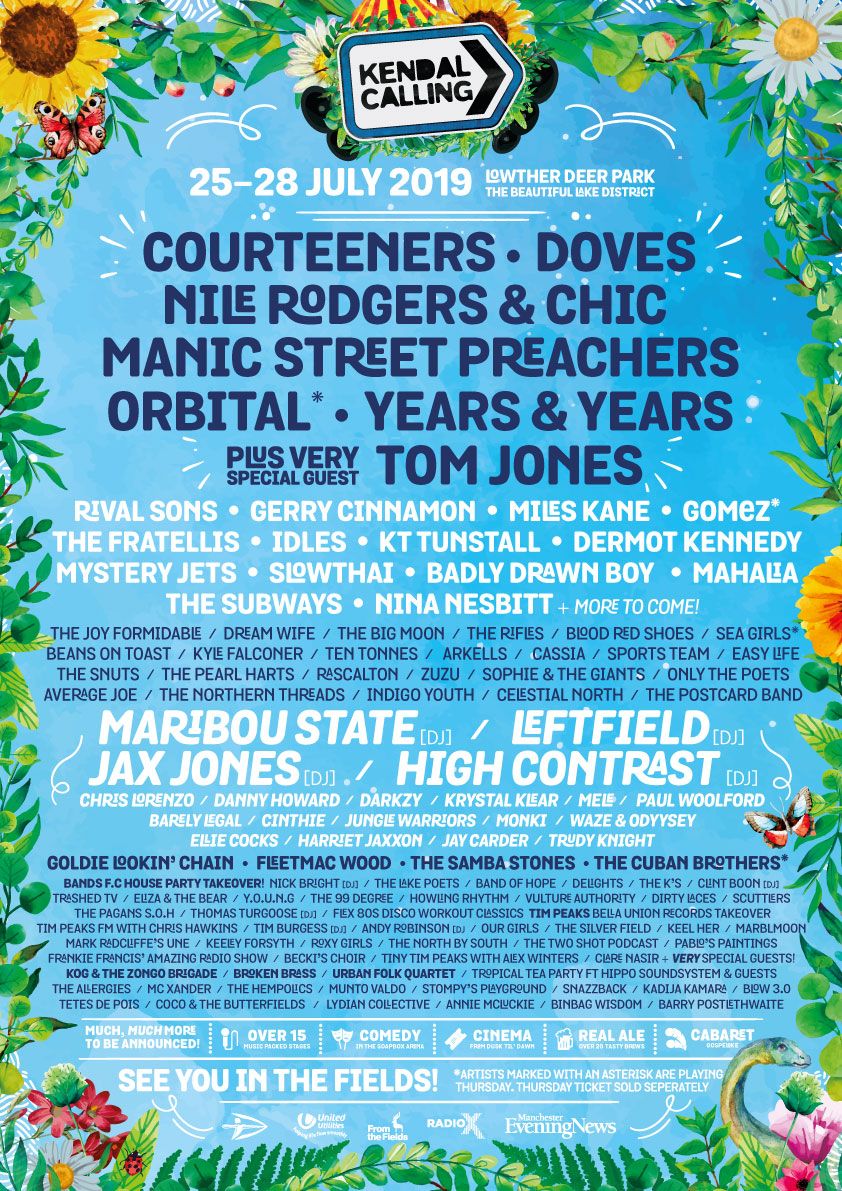 After selling out for thirteen years in a row, the UK’s most picturesque festival announces another huge lineup for 2019. Courteeners, Doves, Manic Street Preachers, NileRodgers & Chic and Orbital will headline a four-day weekend of music, arts, comedy, food and drink in the Lake District’s Lowther Deer Park between 25th – 28th July.

Courteeners have a new album on the horizon and a decade of anthemic live performances under their belt, which makes them perfectly poised to take the headline slot as their first appearance at Kendal Calling. Since the breakout success of Not Nineteen Forever in 2008 the formidable indie group has built a loyal fanbase, capable of selling out 50,000 tickets for their recent Manchester homecoming show in just over two hours. A long-overdue appearance at Kendal Calling is set to be an exciting and memorable main stage moment for the expected 25,000 strong crowd.

The last time fellow Mancunian three-piece Doves played Kendal Calling was in 2010, and ever since then have been on permanent hiatus. The celebrated alt-rock heroes defined their own sound on Mercury-nominated albums Lost Souls and The Last Broadcast, which produced a string of hits including There Goes There Fear and Black And White Town. There’s no better way to embrace their welcome return to the stage after nine years away than with another pounding headline performance at Lowther Deer Park.

The Manic Street Preachers made their debut at Kendal Calling in 2017 and were keen to repeat the “inspiring” experience as soon as possible. After reaching the number 1 spot in the Official UK Album Chart three times, they delivered the critically acclaimed Resistance Is Futile LP in 2018 and picked up praise from the NME who declared it as “an absolute victory”. Expect a set loaded with thirty-three years of rebellious alt rock anthems this summer in Cumbria.

1970’s disco legends Chic will be there to provide the ultimate sing-along dance party, complete with Rock and Roll Hall of Fame inductee and three-time Grammy Award-winner Nile Rodgers. Few groups can boast a catalogue packed with as many timeless classics as Nile Rodgers & Chic, whose works have gone on to inspire many more hits during the past four decades. The New York group’s 1979 single Good Times has become one of the most sampled songs of all time – which Kendal Calling fans will recall from the unforgettable live performance of Rapper’s Delight by the Sugar Hill Gang in 2016.

The techno giants Orbital, famous for their spotlight spectacles and gloriously overwhelming visual displays, will be offering the kind of multi-sensory treat rarely found at a UNESCO World Heritage Site this year. Claimed to be the UK's original dance duo, the two brothers emerged from the 90s party scene during the halcyon days of acid house and are known for their impressive live improvisation and punk politics, which makes them act well worth witnessing in 2019.

"We're thrilled to be heading into our 14th year with no less than five headliners! From anticipated headline slots, to Kendal Calling favourites, legendary sing-along dance anthems & spotlight spectacles, this year’s line-up is one of our most diverse yet, allowing us to bring huge headliners to the fields of Cumbria, as well as exciting female fronted-bands, and shining new stars, amongst the rest of the magic that is sprinkled across the festival site, from art installations, to comedy, cabaret, gourmet food, real ale and so much more!

We cannot wait to welcome our Kendal-Callers, new & old back to the fields for an unforgettable weekend amongst the rolling hills, one which we hope will allow you to create lasting memories amongst your friends, family & new festival acquaintances.

The countdown is officially on – we’ll see you in the fields!"

The impressive list of acts set to grace the lakes continues with the likes of Tom Jones, Years & Years, Gerry Cinnamon, Miles Kane, The Fratellis, Gomez, Kt Tunstall, Mystery Jets, The Subways and Nina Nesbitt, whilst over on the Glow Stage Leftfield[DJ Set], Maribou State and High Contrast [DJ Set] have also been revealed.

Extending beyond the headliners is a line up filled with a broad range of genres, including an impressive crop of female fronted guitar-driven bands such as The Joy Formidable, The Big Moon, Dream Wife, Blood Red Shoes and Zuzu. Some of the most hyped and exciting new talent for 2019 will also be making appearances across the festival’s nine stages, including rising British rapper Slowthai, Bristol’s punk rock masters IDLES, Glaswegian singer-songwriter sensation Gerry Cinnamon and the hotly-tipped indie six-piece Sports Team.

Set in the incredible setting of the Lake District’s Lowther Deer Park, this innovative, fan-focused, independent festival is renowned for more than just music and visitors will also enjoy four days of arts installations, comedy, cabaret, cinema, magic, kids’ entertainment, gourmet food and real ale all within the confines of what is surely the most beautiful festival site in the UK.

Kendal Calling has firmly established itself as one of the undisputed highlights of the increasingly busy summer calendar, regularly picking up a awards including UK Festival Awards’ Best Medium Festival in 2016 and Marketing Campaign of The Year in 2018.

Tickets always sell out for the festival well in advance so fans are urged to get their tickets now to avoid disappointment. See you in the fields!