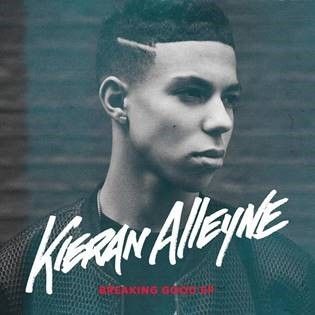 Fresh from the release of his brilliant single ‘Runnin Low’ Kieran Alleyne releases his debut EP ‘Breaking Good’ released on April 5th via Virgin EMI.  At just 19 years of age, Nottingham-born / Leicester-raised Alleyne is firmly on the path to universal recognition as a consummate all round performer, quickly beginning to define himself to the wider world as an undeniable musical talent.

Recorded over the past year and created with the help of the industry’s most in demand production houses such as the likes of DJ Mustard, the EP Breaking Good’ is an extraordinary body of work. A sonic manifestation of Kieran’s personality, each track is set to sit comfortably on radio airwaves and club dance floors and features his powerhouse debut ‘Runnin Low’ and ‘O.M.C’, a smoothed-out record for the streets, which makes clever use of the melody and the chorus from the classic Notorious B.I.G hip-hop anthem ‘One More Chance’, receiving major love from a number of industry tastemakers.  Whilst his upcoming release of ‘Comfortable’ adds a final blow of pop genius and is a testament not only to Kieran’s vocal prowess, but also his ability to confidently create what can only be described as R&B brilliance.

Discovered by and going from strength to strength under the wing of music industry heavyweight Max Gousse (Exec VP of A&R at Music World who had worked closely Matthew Knowles and stars including Beyonce, Jay-Z and Shakira) , Kieran has been preparing himself for the big time since his teens.

He is a certified R&B superstar in waiting, who with a vast array of talents is ready to compete with the best the US has to offer. Kieran, who regularly showcases his skills on his own YouTube channel, also has a growing number of fans at home, including 1Xtra DJ and music industry tastemaker MistaJam, who says of the multi-talented Alleyne: “He’s a new artist who is going to be BIG star and a triple threat who can dance, sing and act. I can’t wait to hear more from him.”

At the rate he’s going, you’d have to say that in 2015, Kieran Alleyne is well on course to becoming a musical force to be reckoned with.