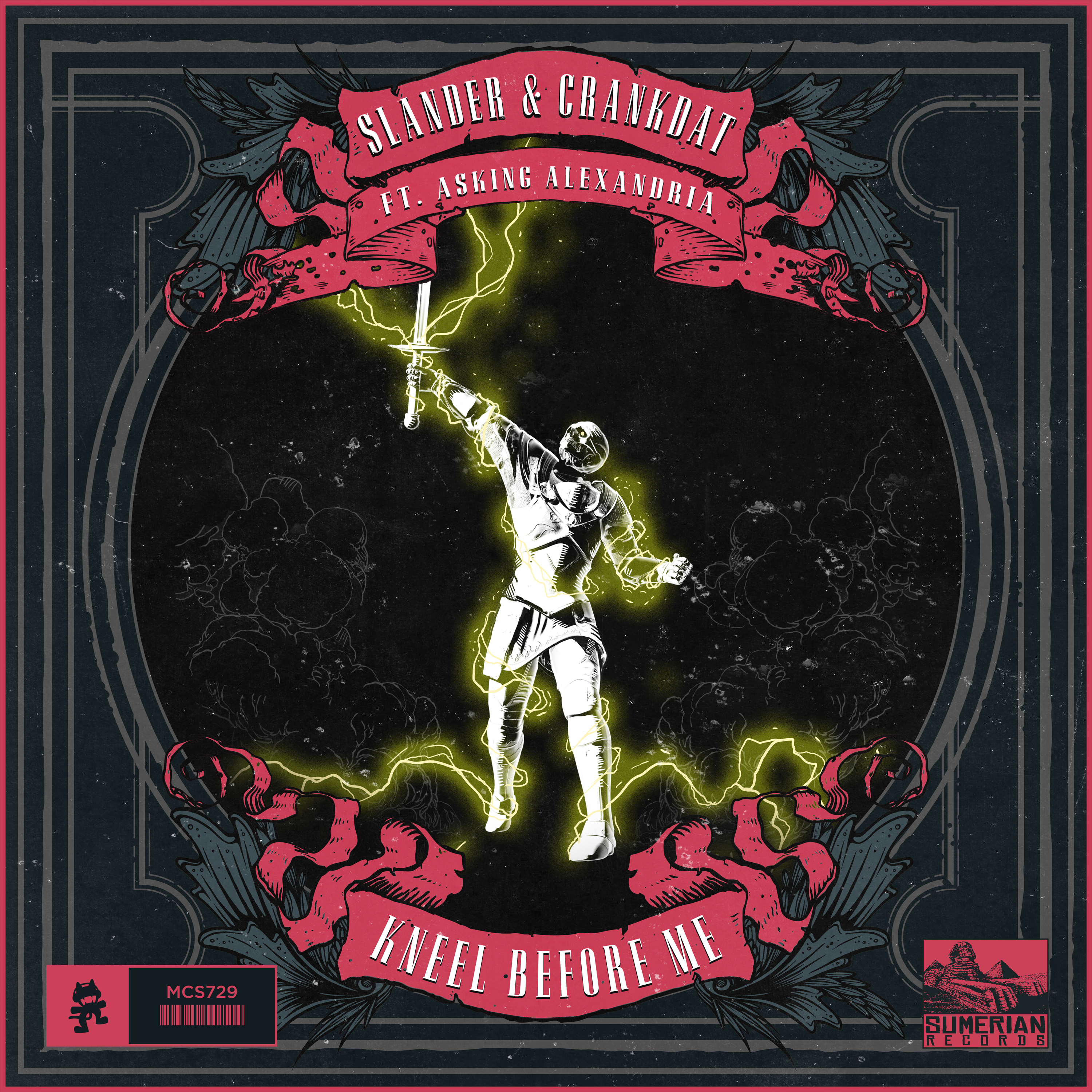 SLANDER ventures into uncharted territory on their hardcore-meets-bass music track "Kneel Before Me" in collaboration with leading UK rock band, Asking Alexandria, and rising talent, Crankdat, on Monstercat/Sumerian Records. Opening with the notes of a sinister storm, "Kneel Before Me" evokes images of the Amazonian jungle during the apocalypse, filled with the sounds of the wild – grating mechanical synths intertwine with the shrieking of animals and growling basslines become one with the clap of thunder. SLANDER's cutting edge production style and Asking Alexandria's angst-ridden vocals give "Kneel Before Me" both emotional and dancefloor appeal, merging the best of heavy rock with the energetic and dynamic bass of dance music. The track has personal significance to SLANDER, as rock and hardcore music were the first genres they immersed themselves in as teenagers; they blasted bands like Avenged Sevenfold, Underoath, and Asking Alexandria themselves from their car speakers in their high school's parking lot.

"This kind of music is in our core and is where a lot of our other tastes developed from, so if you can imagine how thrilled we were when Asking Alexandria agreed to be a part of our new song with Crankdat!" the duo said. "Our goal with this song was to make our own rendition of hardcore music with dubstep at its core, essentially bringing our musical roots into 2018! Hope you guys dig it!"

SLANDER has proven they are capable of so much more than a singular genre. Recently, the duo has been experimenting with an evolved, ever-changing sound on their original productions, proving their ability to produce both bass-heavy headbangers and emotionally stirring melodies. Pairing their multifaceted production with their charismatic stage presence, SLANDER has also made their brand "Gud Vibrations" with NGHTMRE into a bonafide lifestyle. In 2018 they sold out their Gud Vibrations Boat Party in less than 3 minutes during Miami Music Week, and the listenership of their collaborative Sirius XM radio show grows weekly. In their own right, Asking Alexandria have earned their esteemed place in rock history by combining the innovation of modern active rock with the traditional attitude of the culture's trailblazers. They've shared the stage with legendary artists Guns N' Roses, Green Day, Alice In Chains, Avenged Sevenfold, Slipknot and more, as well as played every major rock festival in the world and headlined sold out theater tours. Their singles "The Final Episode" and "Not the American Average" were both certified gold by the RIAA. The music videos for those two singles alone amassed over 100M views on YouTube. Their third full length album, From Death to Destiny (2013), shot to #1 on the Rock and Metal charts in the U.K. and cracked the Top 5 of the Billboard 200 in the United States upon its release. Rounding out the "Kneel Before Me" collaboration with an infusion of fresh, bass-heavy talent, Crankdat is an American DJ and producer who soon will be a household name. He's experienced early success with releases such as "Reasons to Run," "Lemme See U" with Ghastly, and his popular remix of San Holo's "Light." Crankdat recently released a mix for Diplo & Friends' radio show, further solidifying his spot among dance music's rising stars. Stay tuned as SLANDER, Asking Alexandria and Crankdat continue to break down genre boundaries!