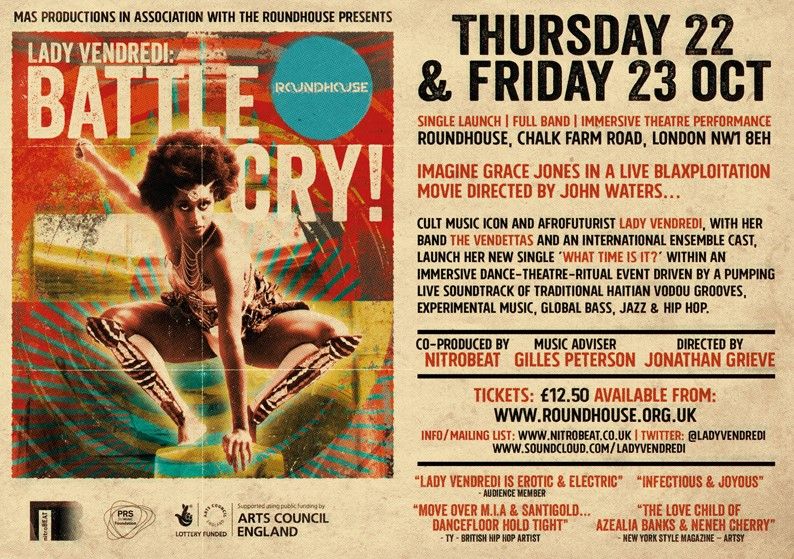 Afrofuturist Lady Vendredi, alongside her band the Vendettas, launches her new single ‘What Time Is It?’ alongside an immersive dance-theatre-ritual event at London’s Roundhouse.

A festival-ready act, her performance-art gig, driven by a pumping live soundtrack of traditional Haitian voodou grooves, experimental music, global bass, jazz and hip hop, debuted last year at Latitude Festival and has since toured Tokyo, moving to London’s Roundhouse and The Southbank Centre in 2015. Lady Vendredi’s show ‘Battle Cry’ at Roundhouse on 22 Oct is also the launch of her new single ‘What time is it?’.

‘What time is it?’ was written whilst Lady Vendredi was DJing at a classical music festival in Rio. The lyrics were written whilst sitting above tropical orange blossomed flowers, after reading Discordian tombe The Illuminatus Trilogy. The track has elements of the absurdity of Discordianism crossed with sci fi themes in the lyrics featuring a mix of vodou rhythms and samba rhythms plus space jazz horns.

Lady Vendredi is gearing up to release her debut EP in 2016, produced by London based trio LV. All the music written for Lady Vendredi’s debut EP is for a concept record/soundtrack for the ritual theatre piece ‘The Passion of Lady Vendredi’ which will be doing a 3 week run at Soho Theatre in April 2016. A theatrical ritual gig somewhere between a grindhouse film and a revenge tragedy. Lady Vendredi says of the show: “imagine Grace Jones in a live Blaxploitation movie directed by John Waters…”