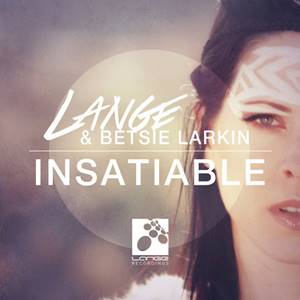 Fresh off the release of his “We Are Lucky People” album, UK-based dance music icon, Lange offers an indelible new single, “Insatiable,” alongside songstress, Betsie Larkin. While the iTunes Dance Top 10 selling album features “Insatiable” as a club mix, Lange has completely reworked the record into a feel good four-to-floor toe thumper.

Having recently premiered on the IDMA nominated music webzine, elektro, the newly crafted “Radio Mix” features a stunning blend of moving synth driven melodies, upbeat drum patterns, and addictive guitar riffs overlaid with Larkin’s spellbinding vocals. The catchy hook and driving rhythms make the Radio Mix of “Insatiable” the perfect soundtrack for a sun laden afternoon along the beach or amidst a dark, crowded dance floor.

As an added bonus, Lange has enlisted the talents of fan-favourite Sean Tyas to assume primary remix duties. Tyas’ remix is a peak time weapon that features a driving rhythm with an edgy rolling bassline, paired with the melodic elements he’s known and loved for. With early supports and radio spins on Markus Schulz’ Global DJ Broadcast and Armin van Buuren’s A State of Trance, the Sean Tyas remix is bound to satiate any dance floor.

The release of “Insatiable” marks Lange and Larkin’s third effort together, following past hits “Obvious” and “All Around Me.” Be sure to add both of these sonic gems to your digital music library next Monday, the 17th of March, available only at Beatport!