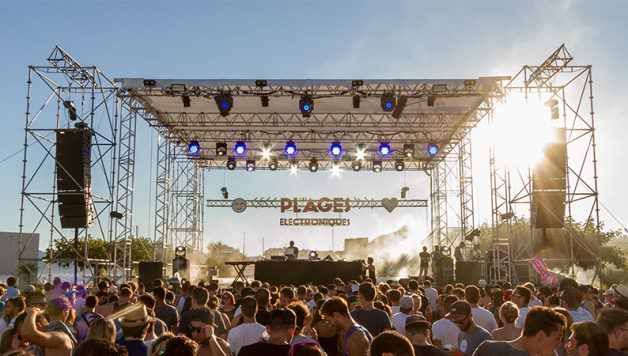 After a 12th edition that again raised the bar in 2017, Les Plages Electroniques returns on August 10th, 11th and 12th to the beautiful beach of La Croisette, Cannes.

Spread across the beach of the Palais des Festivals, its terrace and its famous steps, the festival Les Plages Electroniques is set to confirm its status as the biggest cultural and musical feast in the South-East of France with a line-up including international names from the house and techno world such as Agoria, Amelie Lens, Jamie Jones, Kölsch, Sven Väth and many more.

Now with several years experience behind it and established as one of the major festivals in France since first starting in 2006, Les Plages Electroniques draws thousands of people from all over Europe and is the largest beach party of its kind. It always offers an ambitious program across three consecutive days, four stages, 40,000m2 of dance floors, facilities and a site completely redesigned to offer more comfort to the public, including a real village festival on the forecourt of the Palace with food trucks, beauty corners, chill out space, and more.

New for this year are the after parties, which run until 5:00am in the Rotunda of the Palais des Festivals, and will welcome nearly 3000 "plagistes" (aka beach attendants) and invite them to continue the festival experience until the end of the night.

The artistic programming of the festival, again defined by its bold choices, keeps its DNA oscillating between well-known artists, new talents, big Ibiza regulars, and plenty of surprises so that all connoisseurs of the underground are catered for. There is a mix of live shows and DJ sets and plenty of new sounds and scenes to explore.

These include sets from techno legends like Frenchman Agoria, who has an epic and elegant sound defined by real melody, plus  Cocoon label head and famous vinyl only party starter Sven Väth, who digs deep and serves up colourful sets filled with curveballs. Then there is Belgium’s rising star Amelie Lens, who is headlining all the major events and festivals in Europe this year, as well as contemporary house tastemaker and Hot Creations and Paradise boss Jamie Jones, whose deep and emotive sounds have made him one fo the pin-ups of dance music in recent years. Then there is Kompakt’s serene techno craftsmen Kölsch, with plenty more from Boris Way, Hungry 5 feat. Worakls, N'to & Joachim Pastor, Joris Delacroix (DJ Set), Marst, The Avener (DJ Set) and Synapson (Live).

Les Plages Electroniques promises plenty of surprises, magical musical memories and more great emotions than ever before in 2018.