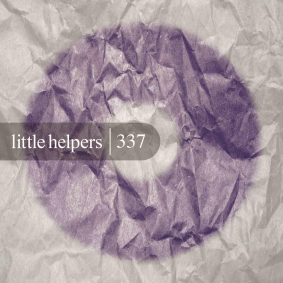 Label boss Butane partners up with Little Helpers favourite Riko Forinson as the pair delivers a collection of debut collaborations for Little Helpers 337.

Since its inception in 2009, Andrew Rasse aka Butane and Sean O’Neal aka Someone Else’s Little Helpers imprint has remained a must-visit label for DJs within the house and techno world. Offering releases packed full of both stand-alone productions and groove-heavy DJ tools, the conceptual imprint now turns to one of its founders partnered alongside one of its core artists in young Italian talent Riko Florinson to deliver an eight track package that digs deeper than your usual Little Helpers EP, offering pockets of melody and striking sound design whilst ultimately remaining functional and fitting the core label brief – to work for DJs.

Butane and Florinson’s opening pair of tracks set the tone immediately, opting for dreamy, rich chords to partner rolling percussive grooves as opposed to the stripped back aesthetics many have come to know them for, before floating into the 303 driven bassline of Little Helper 337-3, or the hypnotic vocal hooks and growling bass tones of 337-4, with the pair firmly switching up the aesthetic.

Little Helper 337-5 offers an instant injection of energy as the duo pair swirling synth lines amongst crisp drum licks and resonant vocal chants and murmurs, whilst 337-6 and 337-7 build on this shift in liveliness with well worked percussion arrangements, stuttered vox’s and further deep yet driving synth work. Last up, Rasse and Florinson strip things back, offering an expertly positioned slice of soul, closing out the package in style with a medley of metallic and organic percussion licks, rich female vocals and snaking grooves throughout – it’s Little Helpers but probably as you’ve never heard before through a perfect demonstration of soulful yet dynamic house music.