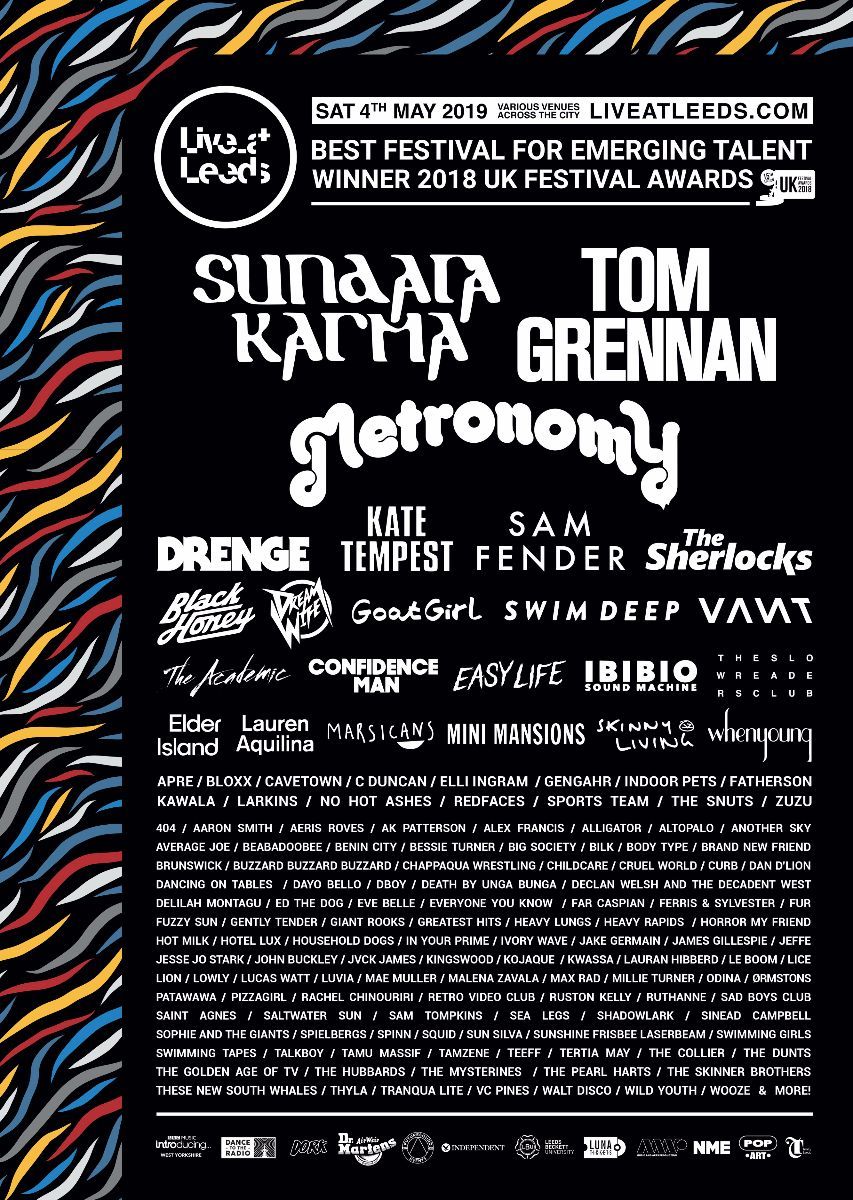 Renowned as the unrivalled home of music discovery, scooping awards and plaudits across the board as a springboard for the latest and greatest new talent – Live At Leeds returns in 2019 with the definitive new music lineup of the year, bringing together the bands and artists primed to soundtrack the year ahead.

Joining a lineup already packed with sizzling leaders and bonafide live favourites are a slew of artists breaking through and picked out as the exciting new sound of 2019 and beyond. Leading the second wave of names is one of the UK’s most potent and influential artists, Kate Tempest. With her spoken-word insights on modern life – she’s been long acclaimed as one of the most vital artists this country has to offer. Expect a spell-binding set when Kate returns for Live At Leeds 2019, pointing to what comes next for an artist able to do whatever she likes.

Fizzing with a fiery punk energy, Drenge stand as true live trailblazers. Bouncing from huge singalongs and an explosive catalogue of fiery hits, their reputation as one of the best live bands in the country has made their return a welcome celebration, with third album ‘Strange Creatures’ promising to be a record full of ambition. Taking to the Live At Leeds stage, Drenge are bound to be one of the highlights of the day. Also primed to be a highlight is BRITS Critics Choice winner Sam Fender, whose uncompromising hooks and earnest rock kicks are sure to make for one of the most in-demand sets of the day. Nodded across the board as the breakthrough star for the year ahead, expect the already rapturously received ‘That Sound’, ‘Play God’ and ‘Dead Boys’ to prove just why the stars are aligning for Sam Fender. Bound to be a sweating pumped-up set, Yorkshire’s own The Sherlocks have truly made their mark – grafting away with shows up and down the land and blossoming into a spectacular word of mouth success. Born for big festival moments, their return is sure to be a bold arms-in-the-air moment at Live At Leeds 2019.

Looking ahead to Live At Leeds 2019, The Sherlocks said:
"Really looking forward to playing in front of the Leeds crowd again! We will bring the Rock N Roll. No backing tracks, how many bands can say that these days? Bring it on!"

Big-time live moments abound at Live At Leeds 2019, meaning behind every door and venue in the city – there’s an unmissable act primed to become someone’s next favourite band. No one may put on a live show quite likeConfidence Man, who in the past 12 months have carved out a phenomenal world of their own, full of infectious disco-pop and laugh-out-loud observations. Expect bright lights, shimmering moves and more when Confidence Man take over Live At Leeds. A true supergroup who’ve influenced and found their place in countless bands around them, Mini Mansions’ blend of seductive modern rock is a sight to behold. With members playing across the likes of Arctic Monkeys and Queens Of The Stone Age, expect undeniable quality when they make their Live At Leeds debut. One of the most admired bands of recent times, The Slow Readers Club will make their Live At Leeds debut this year, for what’s sure to be a magical sight at a band firmly on the rise to something incredible. Also announced are Scottish favourites Fatherson, bringing their emotive alternative rock to the festival for a special set full of hearty anthems.

Speaking about the festival, lead singer Aaron Starkie of The Slow Readers Club said:
“It’s great to be announced as part of a festival known for being ahead of the curve with new music. It’s a great lineup this year, and this will be our first time playing the festival, can’t wait.”

Ross Leighton of Fatherson said:
“We’re really excited to be coming back to Live at Leeds this year. We had a great time in Leeds on our last tour and have been itching to get back since”

Tipped for a huge year, indie rock’s most exciting new prospects Bloxx will return to Live At Leeds as they continue their march to the top after huge nights supporting the likes of The Wombats, Pale Waves and more. Off-kilter indie lines galore will be lit high when Indoor Pets hit the stage, for a fuzz-covered masterclass fresh from the release of their anticipated debut album ‘Be Content’, with Irish trio whenyoung bringing their searing lines of immediate guitar-laden hits as they prepare to truly take over the planet.

Set for huge things in 2019, Bloxx commented on returning to Live At Leeds – saying:
'Live at Leeds is one of our all time favourites to play. Classic festival in a classic city.'

About joining the Live At Leeds 2019 bill, Indoor Pets said:
“Leeds is one of the best towns in the world for live music and it’s always a pleasure to be in the vicinity of some proper tough northern bouncing crowds. I’ll brew the Yorkshire Tea, you just get yourselves limbered up."

Bold, bright and searing in technicolour sounds ready to take over – WOOZEwill bring their distinct flavour to Live At Leeds for a full-on tour de force of a band on the rise, whilst the return of VANT will be sure to see packed rooms spilling into the streets to catch a glimpse of what comes next, sitting alongside one of Scotland’s finest new exports The Snuts. One of alternative music’s most beloved acts Fatherson will be packing their communal singalongs to the festival this year, building on the success of latest album ‘Sum Of All Your Parts’. Across the board – there’s a broad range of bands and artists bringing something fresh and new to the table, and Live At Leeds is the perfect gathering to show to the world. The gritty Hotel Lux, rising Sheffield leaders Sophie And The Giants, fresh-air weavers Swimming Tapes, pop-hook maestro Dan D’Lion, breakthrough revivalists Fur and Norwegian post-punk rippers Spielbergs will all be taking the stage – making for a thrilling day full of the best in new music.

WOOZE said:
“We're over the moon to be playing Live at Leeds this year. We've heard really good things about it for ages so excited to be part of it. It's also going to be our first time in the city of Leeds, for our sins, which has been long overdue.”

Talking about his return to Live At Leeds, Mattie VANT said:
"So excited to be heading back to Leeds for the first time since 2017. No better way to mark my return than a Live at Leeds slot. I'll be playing some old tunes and some brand new ones as well. YORKSHIRE YORKSHIRE YORKSHIRE."

From the garage-cut sounds of Ed The Dog, the riotous snarl of Lice, the wide-eyed indie gems of Liverpool’s Spinn and the dreamy licks of Pizzagirl to YouTube sensation Cavetown, the rising riffs of Jesse Jo Stark, mysterious fresh rap game-changers 404, the grooving Apre, punchy upstarts Body Type and many more – Live At Leeds 2019 is undeniably the hub of the best new music taking on 2019 and beyond.

Pizzagirl said:
“hello! I'm takin a business trip out the bedroom to bring a creamy thick dose of rockstar energy to the bangin LIVE AT LEEDS! it's gonna be epic n great! come hang with me I need the friends x”

Rachel Chinouriri, joining the lineup today, said:
"I'm so excited to play! Live at Leeds will be my first festival, and my first show outside London!"

These new additions join a stellar cast of previously announced names heading to the city, building on Live At Leeds’ unrivalled reputation as the essential home for the soundtrack to the year ahead. With the trailblazing Sundara Karma, revered game-changers Metronomy and man of the moment Tom Grennan topping a bill boasting the likes of Black Honey, Swim Deep, Dream Wife, Goat Girl, Easy Life, Gengahr, Marsicans, Another Sky, Sports Team, Squid, Gently Tender, Fuzzy Sun, Lauren Aquilina and many more.

Speaking about the second wave of names joining the Live At Leeds 2019 bill, Festival Director Andy Smith said:
“This year’s Live at Leeds line up is one of our most eclectic to date, and we’re really proud of how it’s shaping up. We have been trying to get Kate Tempest for years so I’m pleased that it has finally happened. It’s fantastic to see Drenge returning with a new album in time for this year’s festival and I can’t wait to see Confidence Man live again.

Sam Fender is an artist we’ve been supporting for a while, we booked him for our One’s to Watch events last year, so it’s great to have him back at the festival having recently been crowned Brits Critics Choice, we think he’s going to have a huge 2019.

Live at Leeds has always supported guitar music, and this year is no different with a huge representation of young British talent, including The Sherlocks, whenyoung, The Academic, Larkins and The Slow Readers Club.

Emerging talent is at the centre of everything we do, so also happy to be adding hotly tipped new acts such as Bloxx, Indoor Pets, the brilliantly named Death By Unga Bunga and Kojaque.

Still some more to be announced and as usual one or two surprise performances, we can’t wait for May when the summer starts.”

The starting gates to the summer ahead, Live At Leeds 2019 soundtracks a city soaring with the best in new and now.

For more information on Leeds International Festival, head to: