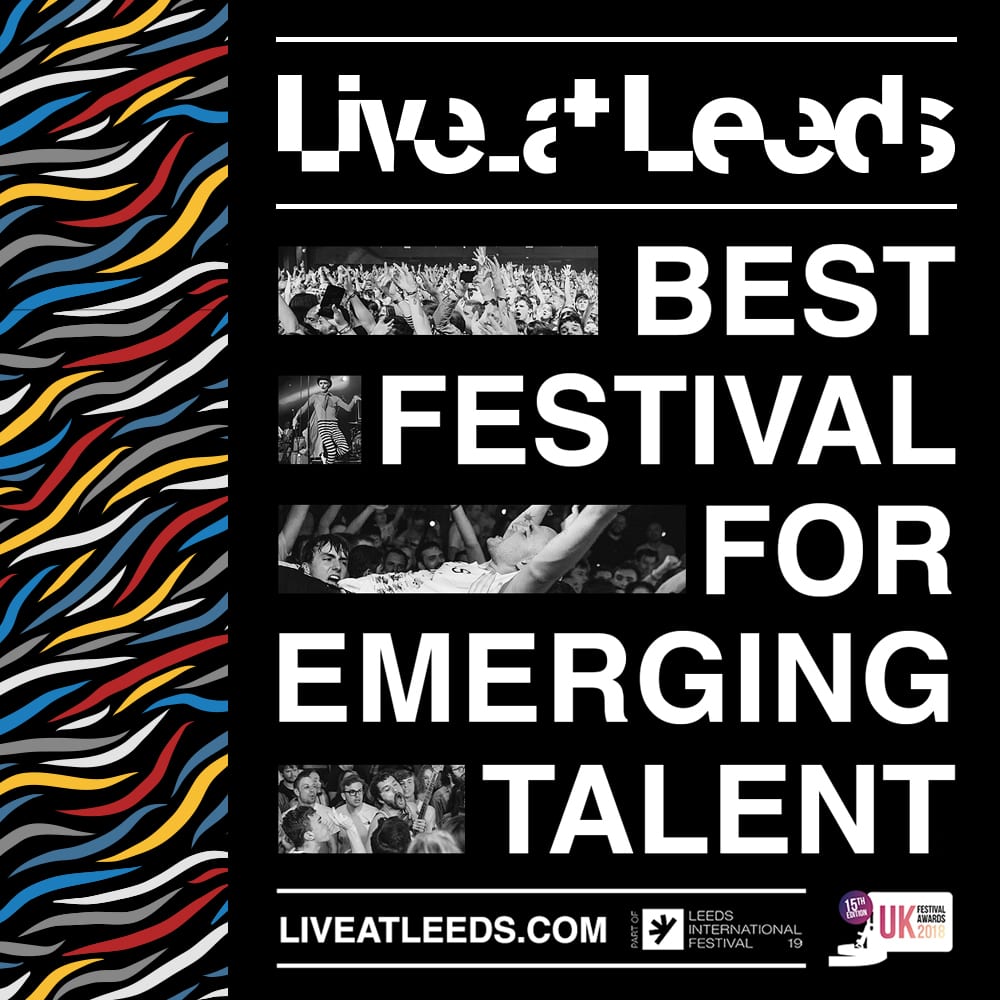 LIVE AT LEEDS has triumphed at the UK Festival Awards 2018, with the festival proudly accepting the award for the ‘Best Festival For Emerging Talent’.

Scooping the coveted gong at the ceremony held at the Troxy in London last night, Live At Leeds saw off a range of shortlisted events to be named as the year’s definitive new music showcasing champion.

As chosen by a panel of experts searching for ‘the festival that most effectively supports and promotes the smallest names on its line-up, helping to guarantee a future in which festivals remain musically vibrant and diverse’; Live At Leeds stood head and shoulders above the competition – proving why it is seen as the ultimate destination for those looking to find their next favourite band.

Offering his reaction to the news, Andy Smith, Head Booker at Live At Leeds said:
“We’re delighted to have been named Best Festival for Emerging Artists at the UK Festival Awards this year. Showcasing new talent is at the heart of everything we do at Live at Leeds. The festival has now become one of the key showcase events in the UK so it’s fantastic to have been recognised for all the hard work that goes into producing the bill each year. Keep your eyes open for more line-up announcements, Live at Leeds will be the first place to catch the most hotly tipped acts of 2019.”

In 2018, the festival boasted a thriving bill of fresh faces destined for greatness, with notable performances from heavyweight favourites The Vaccines, Circa Waves, The Horrors, IDLES and Peace along with striding breakthrough acts such as Pale Waves, The Magic Gang, Nadine Shah, Sam Fender, Superorganism, Boy Azooga, The Orielles, Blaenavon, whenyoung, Ten Tonnes and over 150 artists across its multiple venues and stages – laying down the marker for the most exciting sounds of the year ahead all in one place.

Building on this year’s success, Live At Leeds 2019 is already positioning itself once again as the starting point to the summer of live music – bringing together the names and bands that’ll be on everyone’s lips for the next 12 months. In its recent first announcement, the festival unveiled 55 acts who will be taking to its stages in 2019 with a wealth of hotly-tipped new talent such as Marsicans, Easy Life, Sports Team, Another Sky, Gently Tender, Swimming Girls, Fuzzy Sun, Zuzu, The Dunts, Saltwater Sun, Squid, Heavy Lungs, Retro Video Club, No Hot Ashes, Beabadoobee and Thyla sitting amongst a host of established favourites shaping-up to be the headliners of tomorrow including Sundara Karma, Tom Grennan, Swim Deep, Dream Wife, Goat Girl, Black Honey and more.

The ultimate new music hub, the festival remains unrivalled as the leading light of live music and inner-city moments at each and every turn. The starting gates to the summer ahead, Live At Leeds soundtracks a city soaring with the best in new and now – and the unrivalled home of music discovery.

Tickets for Live At Leeds 2019 are on sale now, starting from £36 + Booking Fee – available from https://www.liveatleeds.com/