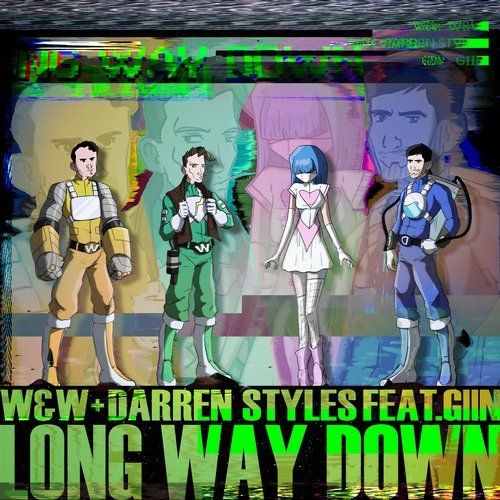 Following the huge success of singles such as ‘The One’, ‘Arcade’ (with Dimitri Vegas & Like Mike) and ‘How Many’ plus their respective music videos, W&W have added another chapter to their animated music video saga. For new single ‘Long Way Down’, which was released today on their own Mainstage Music label, the Dutch duo have gone superhero mode alongside Darren Styles and vocal artist Giin to chalk up yet another head-turning audiovisual combo.

Supercharged by the massive mainstage anthem’s thumping beats and eruptive synth blasts, the fully hand-drawn music video of ‘Long Way Down’ sees W&W team up with U.K. hard dance phenomenon Darren Styles and talented songstress Giin to fight off a dark villain. Inspired by two of the most popular (and nostalgic) animated television shows of the ‘90s, this spin-off episode will prove as thrilling and memorable as the single itself.

Over the past few years, leading dance music act W&W has been responsible for a great amount of global festival hits, from the monumental ‘Bigfoot’ to scene staples such as ‘Arcade’ (with Dimitri Vegas & Like Mike), ‘How Many’, ‘Live The Night’ (with Hardwell and Lil Jon) and ‘Chakra’ (with Vini Vici). Voted the #14 DJs in the world in DJ Mag’s annual Top 100 DJs poll (of 2017), the Dutchmen have proven time and time again that their highly energetic productions are among the very best, and their new collaboration with Darren Styles and Giin will no doubt follow the stream in that respect.

Having played a major part in hard dance’s cross-over into mainstream territory, Darren Styles is arguably one of the most influential figures of the U.K. dance music scene. Between his own work (including #4 U.K. album ‘Skydivin’’ plus many staple singles), his contribution to Ultrabeat’s #2 (U.K. Singles Chart) smash ‘Pretty Green Eyes’ and his masterstroke live sets across the globe, the Englishman is a legend is his own right, a title he has once again validated with his work on ‘Long Way Down’.