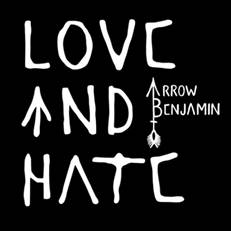 It takes a lot to go toe-to-toe with Beyoncé. There aren’t many vocalists, whether fellow A-listers or ambitious shooting stars, who would have the vocal chops – the guts – to duet with Queen Bey.  Arrow Benjamin most definitely has both, and now he’s back with his exhilarating brand of neo-soul on new single ‘Love and Hate’, which premiered last night on BBC 1 Xtra as Mistajam’s ‘Inbox Fresh Track’.

Arrow’s already been working with many other talented artists and producers, including Major Lazer, Rudimental, Labrinth, Kygo, Plan B and Naughty Boy, and now he’s teamed up with producer Iain Archer (Bat For Lashes, Everything Everything, Jake Bugg) on Love And Hate to create a beautiful combination of contemporary RnB, Pop and Blues.

The young singer/songwriter captured the world’s attention in 2015 when he was featured on ‘Runnin’ (Lose It All)’ from award winning British Producer Naughty Boy alongside the one and only ‎Beyoncé. So far it’s had 135 million YouTube views, reached #1 on iTunes in 31 countries, hit #1 on the UK airplay chart, and is now a Gold record with over half a million sales in the UK. It’s also nominated for a 2016 Brit Award.

Originally from South London, music has always been Benjamin’s passion.  Heavily influenced by a close knit West Indian upbringing, Arrow began writing as early as 9 years old.  “My family loves music. Everything gets played, nothing gets shunned.”

He is supporting Seinabo Sey at XOYO March 3rd, with more dates to be announced.