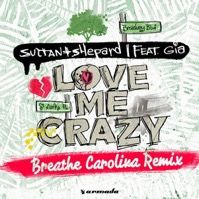 Following on from their latest single ‘Love Me Crazy’ Sultan + Shepard have revealed the remix for the track which comes from Breathe Carolina. Transforming Sultan + Shepard’s original masterpiece into an all out EDM Banger, Breathe Carolina show why they’re one of the hottest acts of the moment. Their rendition of ‘Love Me Crazy’ is absolutely stellar, spotlighting Gia’s catchy vocals in a wrap of hulking synths and pounding beats. Expect to see this one hit dance floors the world over.

‘Love Me Crazy’ is Sultan + Shepard's latest poppy, reggae-flavored collaboration with singer-songwriter Gia. The single sees its release on Armada Music and is the first of several extraordinary creations, all to be bundled into a full-blown EP.

‘Love Me Crazy’ rises as Sultan + Shepard’s first release on Armada Music after signing exclusively to the Amsterdam-based record company about a month ago. Before inking a deal with Armada Music, the Canadian studio magicians had already worked with the label to release ‘Bring Me Back’, a track made in collaboration with singer-songwriter Kreesha Turner and put out in September 2015. ‘Bring Me Back’ was recently remixed by fellow Canadian artist Guilty Pleasure, which was also released on Armada Music.

Sultan + Shepard formed in 2010, after which their solid in-studio output and vibrant on-stage performances gained them international recognition. In the past five years, Sultan + Shepard worked with and/or remixed tunes from far-famed artists such as Kaskade, Dillon Francis, Tiësto, Lady Gaga, Nelly Furtado, Coldplay, Madonna, and more. In 2013, their remix of Bruno Mars’ ‘Locked Out Of Heaven’ earned them a Grammy® nomination.