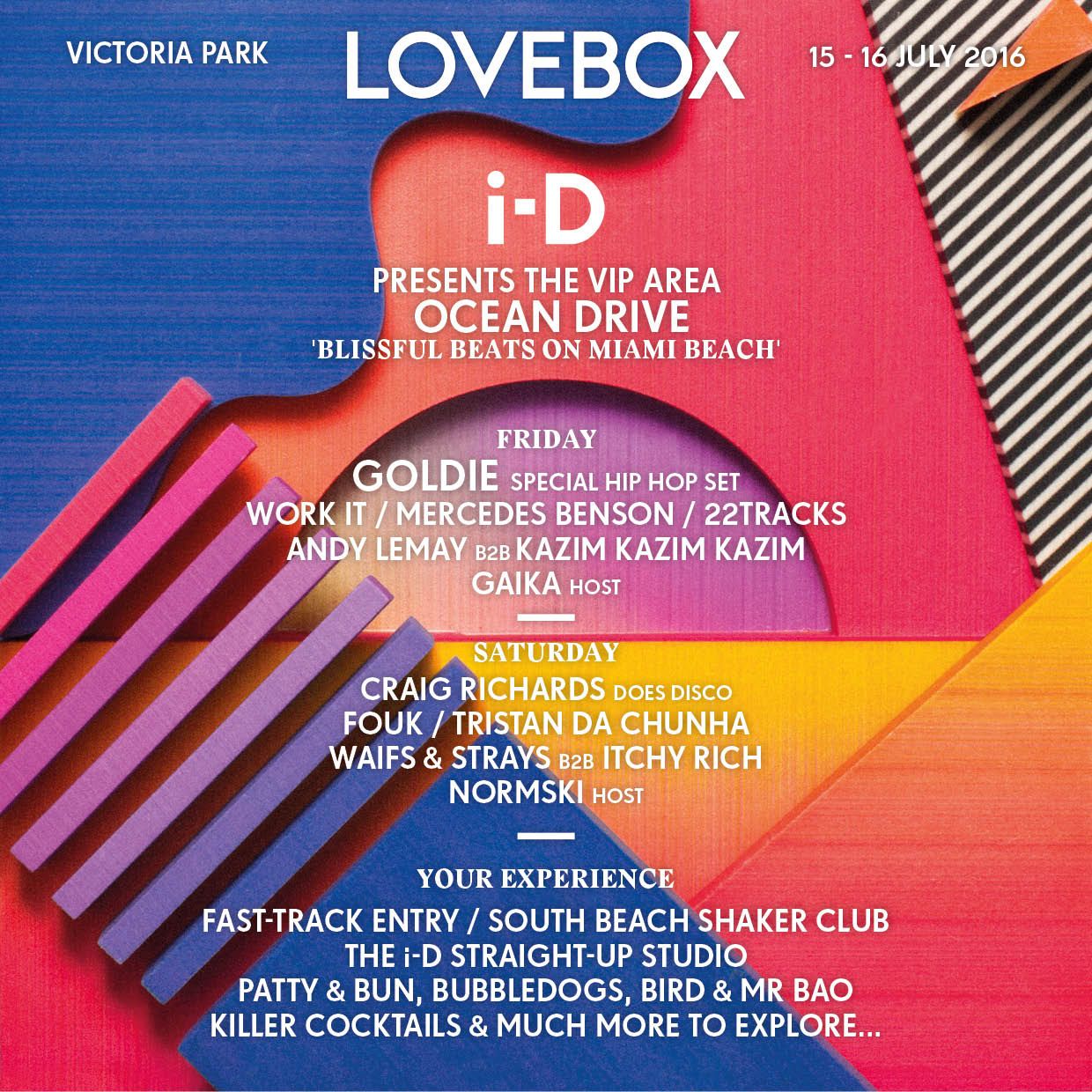 Now entering its fourteenth year, London’s favourite festival Lovebox returns to its home in Victoria Park for its biggest year yet.

With headlining sets from LCD Soundsystem and Major Lazer, and appearances from the likes of Run The Jewels, Jungle, Diplo, Miike Snow, Chronixx and Chet Faker, it’s set to be an incredible weekend of music, food, drink, and creativity.

Revellers will throw shapes at the South Beach Shaker Club to an exclusive, killer lineup throughout the weekend. On Friday, the inimitable Goldie will be performing an extra special hip hop set, plus there’ll be appearances from experts in all things 90s Work It, DJs from music discovery service 22Tracks and a back to back set from friends of Lovebox Kazim Kazim Kazim and Andy Lemay. On Saturday, get down to the sounds of Dutch duo Fouk, a disco set from the one and only Craig Richards, house legend Tristan Da Cunha and a back to back set from Itchy Rich and Waifs & Strays. It’s the ultimate summer soundtrack.

Guests will be able to refuel with a tasty selection of delicious food and drink. London’s finest restaurateurs will be serving up their signature specials, with the best burgers in the city courtesy of Patty & Bun, tasty hot dogs from Bubbledogs, fried chicken from BIRD, and steamed buns from Mr Bao. The Cockatoo Cocktail Bar will be on hand with divine cocktails to wash it all down with.

Elsewhere, you can capture your time in the sunshine with the i-D Straight Up Studio, who’ll be snapping you and your crew in style with their onsite studio.

You’ll be fully immersed in the world of Ocean Drive, rubbing shoulders with colourful characters and movers and shakers who will be partying with you throughout the weekend.

Set to feature some of the world’s best DJs, London’s finest food and ultimate good vibes, i-D presents VIP Ocean Drive will be just as colourful and compelling as the rest of the festival.

Your VIP wristband gives you:
– Fast track entry to the festival
– Access to the backstage VIP area
– An exclusive programme of music and entertainment all weekend
– Surprise sets and intimate performances
– Luxury toilets

VIP tickets from £98.50 at www.ticketmaster.co.uk/lovebox