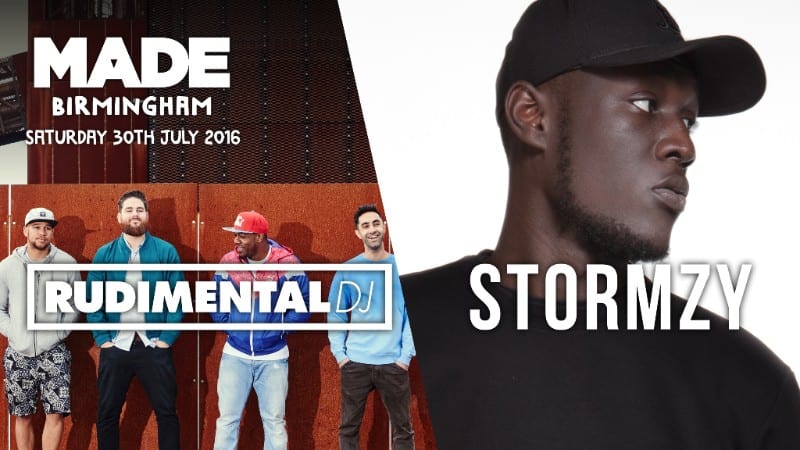 A successful sequel to its credit, with highest praises and finest sounds still ringing in their ears, the organisers of Birmingham’s own MADE festival, nominated for Best Metropolitan Festival in the UK Festival Awards again last year, have announced none other than Rudimental and Stormzy for 2016. Tickets will go on sale Friday 5th Feb. Time is short and capacity limited to book tickets for Birmingham’s leading music festival, a taste of the best from world talent in the UK’s second city, ahead of a wider lineup locked on and soon unleashed.

Rising to fame as much for party antics as their astounding musicality and with awards like MTV, MOBO and Mercury Prize under their belt, Rudimental will bring their intoxicating drum ’n’ bass to MADE’s crowds. Present at the first edition themselves, they “partied hard” and are “excited to be back to actually play this time.”

Undisputed grandee of Grime today, Stormzy steps up for his Birmingham festival debut, "really excited to play MADE Birmingham, there's some sick music coming out of the city and the crowds are always mad”. No one standing taller on the scene – himself, no less than Rudimental, proving the second to none credentials of MADE. The full details of tier one from MADE’s top-tier lineup still to come, the headline duo will undoubtedly see a pre-emptive strike on tickets even before all the information on another innovative, international schedule are in.

Festival Director Pete Jordan made this statement ahead of announcement: “The third edition of MADE Birmingham will see the event return to Digbeth in a fashion that will build on the phenomenal success of the last two years. Once again, we’ll be curating an amazing offering of music, performance arts, graffiti art, street food and creative culture that Birmingham has in abundance. I’m pleased to say that the line up for this years event will see MADE catapulted into the realms of some of the best festivals the UK and Europe have to offer. We are proud to be, once again showcasing the wealth of what Birmingham modern culture has to offer and finally putting the city on the music festival map.”