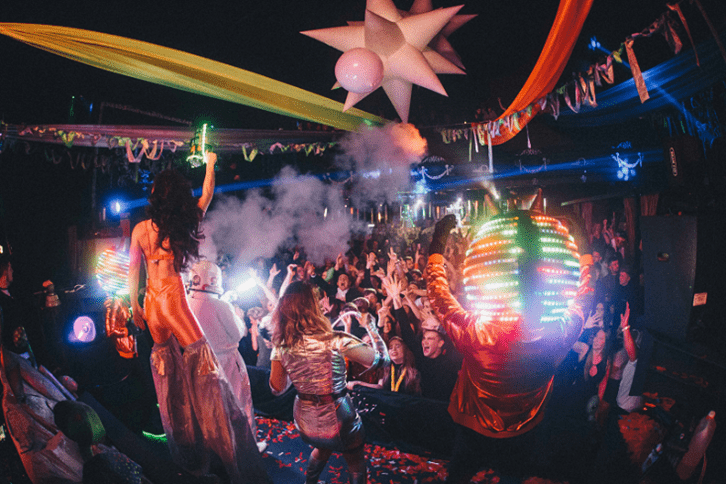 Magical Club Night, Foreverland Unveils Lineups For 2018 Tour With Guests Including Artful Dodger, General Levy, Flava D, Cause & Affect, Shift K3Y And More For Events Up And Down The UK

The unique and visually stunning club night that is Foreverland is excited to announce the lineups for a busy run of 11 events from 27th January until 21st April. Setting up in leading clubs in Edinburgh, Leeds, Cardiff, Northampton, Glasgow, London, Newcastle, Portsmouth, Southampton, Lincoln and Belfast, the party promises plenty of immersive atmospheres, bespoke stage builds and mesmeric light shows, as well as a carefully curated selection of DJs and live performers. Covering everything from bass to grime, garage to jungle, guest DJs include Artful Dodger, General Levy, Flava D, Cause & Affect, Shift K3Y, Foor, Royal T and more. Tickets start at £10 plus booking fee and are available now fromwww.theforeverland.com.

Since launching in Bournemouth in 2015, Foreverland has visited 22 cities and made festivals appearances at Bestival, El Dorado and Budafest. At every event, the weird and wonderful collide with a selection of themed characters that interact through the crowds, amidst giant props and inflatables – staying young and care free when in attendance is strongly advised! Taking you back to childhood but with an adult soundtrack and of course plenty of grown up drinks, Foreverland makes each party unique with CO2 and confetti cannons, live entertainment and anything from giant jellyfish to men in LED spacesuits via a 8ft giant-moon crater to add to the illusion.

The latest chapter in the Foreverland story starts on 27th January at ATIK in Edinburgh, with hit rapper Sneakbo. Behind hits like ‘Oliver Twist’ and ‘The Wave’ he mixes up rap, grime and reggae in fresh new ways and always brings high energy levels to his sets.  From there it is to Church in Leeds on 2nd February with the man behind 2017 hit ‘Move’, namely General Levy. One of the most in demand MCs of his generation, he’s worked with the likes of Sly & Robbie and Shaggy and remains a true stalwart of the scene.

The night after on 3rd February sees the party move to Tramshed in Cardiff with bass house star and Beatport chart topper Cause & Affect from labels like AC Slater’s Night Bass; and FooR, a group of producers, musicians and DJs from the South coast who are regularly on Radio 1, 1xtra andKiss FM with tracks like their massive ‘Down’. The rest of February sees a stop at Roadmender, Northampton (9th Feb) with Shift K3Y, the UK garage and deep tech talent behind Top 3 UK Chart hit ‘Touch’, then on the 16th it’s the legendary Artful Dodger at Glasgow’s O2 Academy. A pioneer of the 2-step sound who very much still defines the scene, the sound will be a mix of old and new and utterly thrilling. Artful Dodger then plays again with Shift K3Y on the 23rd at Clapham Grand in London.

March starts off at the superb Digital in Newcastle on Friday the 9th, with another set from Artful Dodger as well as Butterz and Rinse main man, Royal-T. Last year his collaborative album with DJ Q and Flava D was a standout work that showcased the best of contemporary grime and garage. After the next Foreverland party in Portsmouth at Pyramids on the 24th (lineup TBA), Thursday 29th finds General Levy and Cause & Affect line-up at Switch in Southampton.

Finally for now, Flava D plays Engine Shed in Lincoln on 13th April and again on the 21st at Mandela Hall in Belfast. She is coming off the back of a huge Foreverland NYE party at Funktion in Hull and a busy two years which have seen her put out an essential mix in the official Fabric series, a collaborative album on Butterz and plenty of hot 12”s that mix up hip hop, house and grime into arresting new forms.

Tickets for all Foreverland tour dates are now on sale from www.theforeveland.com. Prices start from £10 plus booking fee.