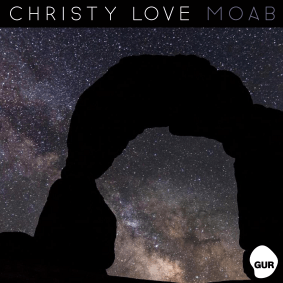 Christy Love returns to her own Get Up Recordings this August with ‘Moab’, backed with remixes from Vin Sol and Fatherhood.

Christy Love has long been a respected figure in the U.S House scene, originally cutting her teeth as a DJ in San Francisco’s bustling electronic music scene during the late 90’s before relocating to New York where she remains and has become an integral part of the city’s club scene. With partner in crime W. Jeremy she launched the Stank parties, hosting the likes of DJ Pierre, Glenn Underground and Cajmere, and soon after the pair launched Get Up Recordings, a platform for their own music as well as material from the likes of The Black Madonna, Honey Dijon, Eli Escobar, Lauren Flax and many more.

The original mix of ‘Moab’ leads the package with a high-octane feel, fuelled by a robust organic drum groove, murky echoing stabs and a snaking sub bass running alongside breathy murmurs and tension building strings, the result is an authentic slice of soul-infused House aimed squarely at the dance floor.

Vin Sol’s ‘Puppy Chow Remix’ then closes the package, seeing Vin embrace his typically raw approach to House music with crunchy claps, acid-tinged, stab driven bass, modulated synth lines and the original’s vocal chants all subtly unfolding in a loop driven fashion across the interpretation’s five and a half minutes.