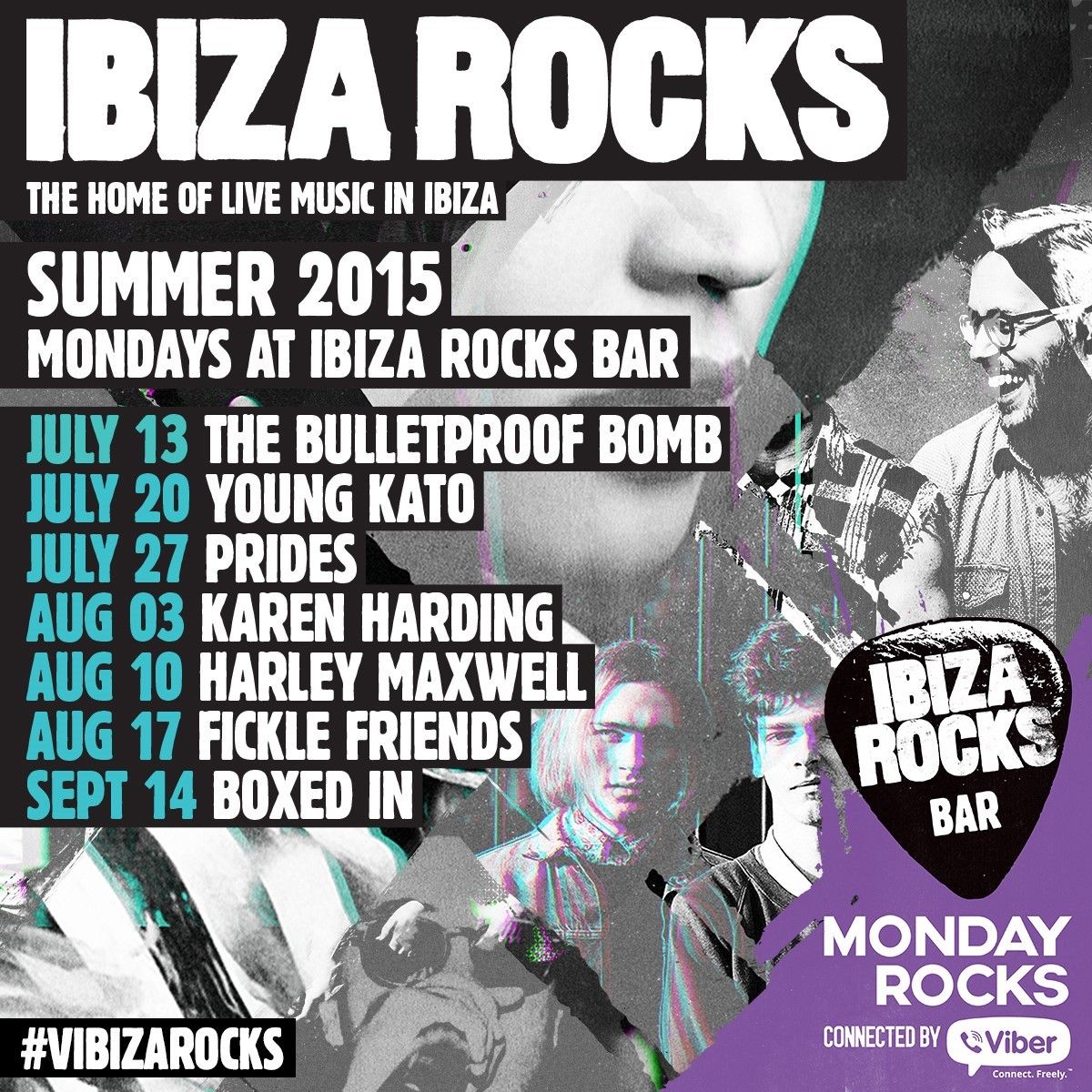 It’s a massive 10th Birthday year for Ibiza Rocks and as part of the celebrations the ground-breaking brand is taking live music back to its original home at the Ibiza Rocks Bar.  Monday Rocks will provide a further platform for a handpicked list of the most exciting new artists of 2015 to take to the open-air, beachside stage from 13th July to 14th September.   In an exciting move that sees Monday Rocks partner with free instant messaging and calling app Viber, fans can catch the inside scoop and backstage chat from Ibiza Rocks on Viber’s Public Chat all summer – simply search #vibizarocks.

Since launching in 2005, Ibiza Rocks has quite simply destroyed preconceptions of Ibiza by bringing live music and fresh energy to the White Isle. As the original venue of the Ibiza Rocks live gigs, Ibiza Rocks Bar (formerly named Bar M) has played host to a number of iconic Rocks moments with everyone from Arctic Monkeys, Kasabian, Mark Ronson, Kaiser Chiefs, Pete Doherty and LCD Soundsystem performing intimate live sets under the stars.

In 2008 the Rocks gigs moved to a permanent home in the larger capacity Ibiza Rocks Hotel which will see The Libertines headline Ibiza Rocks 10th Birthday show on 22nd July.  As well as welcoming festival headliners and music icons, Rocks has a rich history of spotting and supporting the best new talent on the circuit.  To mark the incredible 10 year journey and provide a further platform for a hand-picked selection of new artists, it’s all back to the bar where it all began for Monday Rocks.

Kicking off the inaugural Monday Rocks is hotly tipped London five-piece The Bulletproof Bomb – a band Rocks has supported from the start and helped to develop since playing Ibiza Rocks the Snow in 2013.  More recently the band played Rocks’ new UK talent event ‘Fresh Out the Box’ in London and this summer they play Croatia Rocks Festival alongside The Vaccines and Clean Bandit. The Bulletproof Bomb are set to kick of Monday Rocks with a bang on 13th July before supporting Catfish & the Bottlemen at Ibiza Rocks on 15th July.

Next up and in collaboration with leading UK club night This Feeling, Monday Rocks will welcome synth-pop six-piece Young Kato to the Ibiza Rocks Bar on 20th July. Their much-hyped debut album ‘Don’t Wait ‘Til Tomorrow’ was released in April followed by an 18-date headline tour including a sold out show at The Garage, London.  With fans including Fearne Cotton and Zane Lowe and an ever-growing fan base, Young Kato are making their mark and bringing synths together with sunshine vibes at the Ibiza Rocks Bar.

Fresh from a standout set on the John Peel stage at Glastonbury, Glasgow band Prides are riding high and ready to smash the festival circuit this summer. Since playing the Commonwealth Games closing ceremony to 7.5 million people on BBC1 last year, headlining the BBC Introducing Stage at Reading & Leeds Festival, embarking on their first headline tour and now about to release their highly anticipated debut album ‘The Way Back Up’ this Scottish trio are about to go stratospheric. This special gig is a big coup for Monday Rocks on 27th July.

Karen Harding may be a fresh face on the scene but has already scored a Top 10 single with her MNEK-produced ‘Say Something’ and her stunning vocals feature on Belgian house duo Arches new track ‘New Love’ which is set to be one of the standout soundtracks of summer.  Karen Harding plays Monday Rocks on 3rd August before supporting Clean Bandit at Ibiza Rocks on 5th August.

Ibiza resident turned UK hip hop social media sensation Harley Maxwell takes the lead on 10th August to represent the new element of the UK hip hop scene with tracks from his ‘Summer Days’ EP, all written in and inspired by Ibiza. This will be a special, solo homecoming show before Harley supports hip hip icons De La Soul at Ibiza Rocks on 12th August.

Brighton five-piece Fickle Friends are one of the most blogged bands on the planet as well as being one of the most genuinely exciting new talents.  They amassed over 750,000 Soundcloud plays from their debut single ‘SWIM’ last year, became HypeMachine’s 25th most blogged artist of 2014, received critical acclaim from Zane Lowe, Billboard & BBC Introducing and are a firm festival favourite. Currently on their first UK headline tour which included a sold out date at London’s Barfly, the band will take a special break to the Balearics for Monday Rocks on 17th August.

Closing the first summer of Monday Rocks is London quartet Boxed In who have received massive support from Radio 1 and 6 Music since releasing their self-titled debut album earlier this year. Between a summer full of UK and US shows and new track ‘Full Circle’ with Berlin based DJ and Producer George Fitzgerald blowing up, the time is now to catch these guys in an intimate venue at Monday Rocks on 14th September.

As the home of live music in Ibiza, Ibiza Rocks is a groundbreaking event known for bringing the biggest artists to play on the world-famous poolside stage.  Ibiza Rocks is also a lifestyle, a journey and a platform for new artists to showcase their talent. From  ‘Fresh Out the Box’ (London’s Boxpark in Shoreditch), to centre stage at Monday Rocks (Ibiza Rocks Bar) to supporting music icons and festival giants at Ibiza Rocks (Ibiza Rocks Hotel), Rocks are putting all the steps in place to take new talent up through the ranks and right to the top spot as Ibiza Rocks headliners as their stardom soars.

Monday Rocks is connected by Viber: the instant messaging and calling app that provides free HD-quality phone and video calls, text messages, fun stickers and more. Simple to use, your phone number becomes your Viber ID and the app integrates seamlessly with your contact list. Viber has more than 573 million unique users in 193 countries. Within just a few weeks of launching, Ibiza Rocks has become Viber’s most followed Public Chat about Ibiza.

Search #vibizarocks all Summer to find out all about the hot happenings.

This is a FREE event.  Doors from 8pm.  Pre-register for FREE entry www.ibizarocks.com