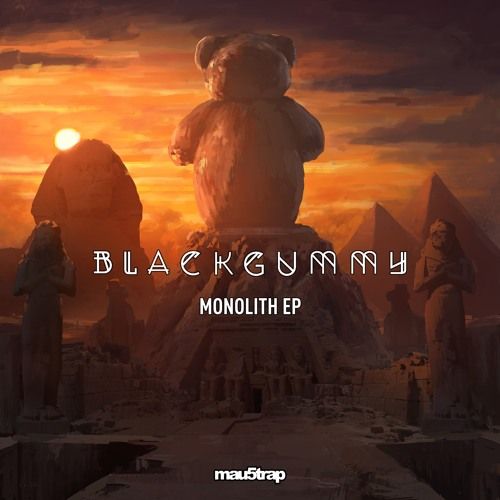 Since the dawn of time, humans have strived to communicate the meaning of life, both with each other in the present and for those that would come after them; stories took the form of symbols and shrines, as evidenced by Egyptian hieroglyphs, Stonehenge, and countless other artifacts that remained long after their artists had left this Earth. Now, the enigmatic producer-idol entity has taken on the musical exploration of this ancient symbolic connection in his newest EP, "Monolith." From the ominous opening of "Iconoclast" through the progressive waves of "Arp Makes Sphinx Purr" and the driving house aesthetic of "Desert Fire" to the eventual dark, soul-scraping synths of "Edifice," BlackGummy serves as a sonic shepherd through a myriad of emotions. True to form, every nuance of "Monolith" is complex, challenging the status quo of both music and its interpretation. Released on Mau5trap, "Monolith" makes of a trifecta of BlackGummy’s previous – and equally intruiging – EPs, "Singularity" and "Impactor."

BlackGummy is neither person nor thing; it is an entity that was first born when Los Angeles-based producer Iman Marouf discovered BlackGummy during a trip to Asia and the Middle East. The man and the idol instantaneously became intertwined to the point that each was an extension of the other, and BlackGummy as we know him was created. The reclusive entity rarely leaves his home, where he produces long into the night, except on occasion to perform at venues for his legion of fans and to search the globe for additional clues as to BlackGummy’s origin. His most recent discovery was the Latin inscription "In perpetuum, salutem in omnibus locis; In omni loco, in omni tempore." Rest assured, the search is not over, and thus neither is BlackGummy’s musical journey.