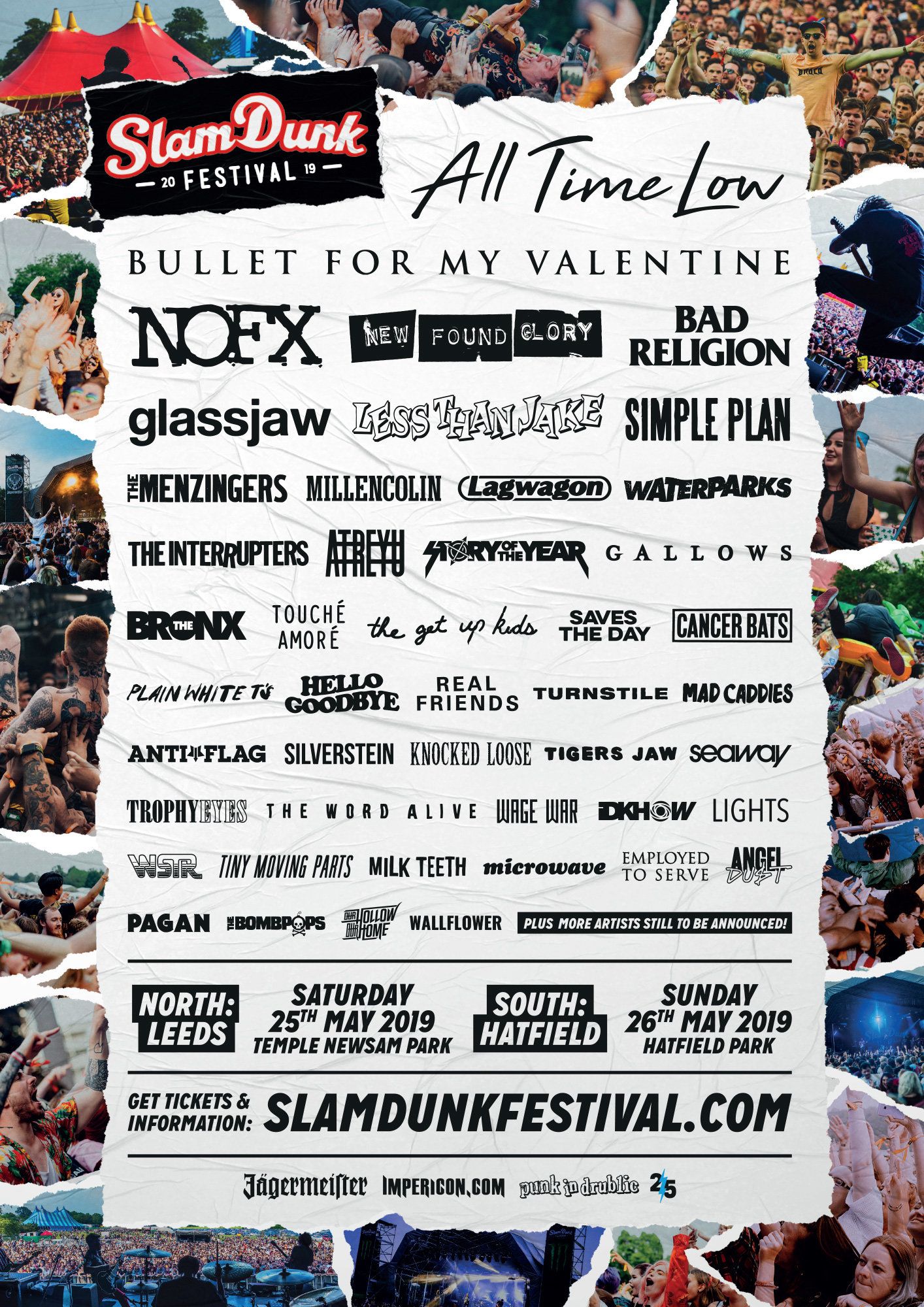 Hot off the last mind-blowing announcement, Slam Dunk Festival are showing no signs in slowing down, revealing another 10 names for the UK’s favourite alternative all-dayer.

Making their debut Slam Dunk Festival performance this year, Plain White T’s are set to make an appearance at Leeds and Hatfield over the bank holiday weekend. Armed with an undeniably successful selection of indie-rock anthems, the American quintet saw astronomical acclaim with quadruple platinum hit ‘Hey There Delilah’ and the guitar-driven, ‘Our Time Now’. The band return to UK shores with latest album, the energetic Parallel Universe.

After bursting onto the alternative scene with the release of their critically acclaimed debut album, Zombies! Aliens! Vampires! Dinosaurs, which featured sweeping indie-synth-pop delights such as ‘Here (In Your Arms)’ and ‘Baby It’s Fact’, Hellogoodbye became a mainstay of US indie-rock. Three anthemic albums later, Forrest Kleine and the gang are set to return to Slam Dunk Festival bringing their newly-developed sultry pop rock for a highly-anticipated performance, decorated with both new hits and emo classics.

Forrest Klein of Hellogoodbye says;
"We're totally giddy to be invited over to Slam Dunk this year! The line up is insane, so many friends and lovers in one spot, it'll be a completely gratuitous smile fest. Hellogoodbye has seen (and self-inflicted) countless changes between Slam Dunk visits in 2006, 2011, and now 2019; but I've got no doubt SDF will remain comfortingly the same: AN ABSOLUTE FUCKING TREAT.”

As influential as they are inimitable, Touche Amore’s signature mix of perfectly discordant post-hardcore and intelligently raw screamo has earned the Los Angeles group legions of devoted fans. The quintet’s ability to balance sincerity and disorder on a knife edge is as captivating live as it is on record, making their riotous performance at Slam Dunk Festivalnot one to be missed this summer.

Canadian alt-pop sensation Lights will also make her debut Slam Dunk Festival performance this year. One of the fastest rising stars of the decade, Lights has amassed millions of fans worldwide with her one-of-a-kind blend of magical pop melodies. Her latest album, the ethereal ‘Skin & Bone’, won JUNO’s 2018 Pop Album of the Year award.

Lights says;
"I’m so pumped to be on the Slam Dunk bill for the first time. Not only am I excited to play with a bunch of great bands, but it’s been over two years since I’ve been back in the UK so needless to say Slam Dunk can’t come soon enough.”

Proving that there’s more to Scranton, Pennsylvania than a fictional paper company,Tigers Jaw deliver emotionally-driven anthems time and time again. The duo responsible for impassioned tracks such as ‘Plane vs. Tank vs. Submarine’, ‘Guardians’ and ‘Never Saw It Coming’ have earned a loyal fanbase who they’re set to delight at this year’s Slam Dunk Festival.

Atlanta-based rockers Microwave join the impressive line up, promising a vibrant performance at Slam Dunk Festival. Expect their trademark heartfelt lyricism mixed with rushing guitars and rock sensibilities on tracks from their debut ‘Stovall’ and most recent release, ‘Much Love’.

Continuing the heavy, Employed To Serve and Our Hollow Our Home will represent the very best in the UK metal at Slam Dunk Festival, set for a brutal face-melting display across the weekender.