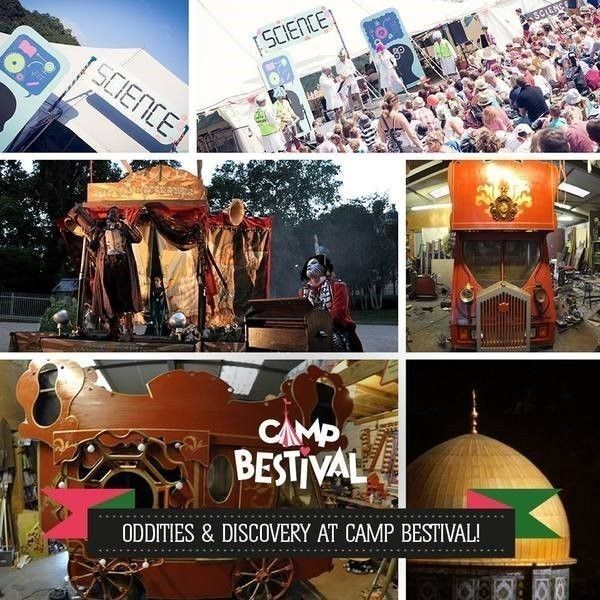 No circus is truly complete without a touch of magical miscellany, curious attractions and inexplicable distractions. And so, Camp Bestival¹s most aberrant roustabouts have not only created an inspiring world of discovery with Oberon¹s Observatory, the LEGO Imagination Factory and the Science Tent, but they¹ve also brought together a breathtaking collection of oddities like Caravan of Lost Souls and Britain¹s Not Got Talent that will enthral the whole family at Lulworth Castle this July 31-August 3.

Rob da Bank says: ³We¹ve got all sorts of incredible curiosities coming to Camp Bestival this year. From off the wall circus treats in the Caravan of Lost Souls, LEGO and their brilliant Imagination Factory, and surveying the site with a camp-bestiscope in Oberon¹s Observatory to the mayhem of Britain¹s Not Got Talent and amazing experiments in the Science Tent, there¹s loads of ace stuff for all the family to discover. See you at Lulworth Castle!²

Starting with some curious circus fun, we have a true delight for the ears and eyes. Igor Rasputin¹s Caravan of Lost Souls is an incredible ape-powered pop-up circus providing wondrous entertainment for your delectation and appreciation. Witness magic, contortion, hula hoop, mime, an amazing array of circus skills and more from this cabaret of curiosity, popping up in all four corners of Camp Bestival!

Entering a world of discovery, we are extremely excited to announce that LEGO will be joining us to kick off the summer holidays in style, with the Imagination Factory. A celebration of Œfree build¹, this magical environment will immerse you in the LEGO belief in the power of each individual¹s imagination. Doubters might see a pile of bricks and accessories but Œwe¹ see a jet fighter, a beautiful flower, an alien monster, our dog called Spike or the skyline of New York. The golden rule of The Imagination Factory is that there are no rules ¬ no rights or wrongs ¬ just inspiration to let LEGO enable you to build anything that your imagination can conjure up.

In 2014, the year that modern man will try and harpoon a comet, Camp Bestival is proud to present Oberon’s Observatory. A ramshackle but beautiful edifice with a stargazer’s viewing platform, there will be camp-bestiscopes for studying the curiosities happening across the festival and searching for the stars. Hidden in the heart of Oberon’s Observatory is an old projection room where Camp Bestival will screen 21st century windows into other worlds, space and art. For the period of one lunation only, Camp Bestival invites you to come and explore this extraordinary building.

Leaping headlong into the truly odd, the Showmany Calliope is mixture of traditional fairground showman heritage, pyrotechnics, a full independently powered 4K sound system and a bowtop caravan themed stage, that will play host to the devilish Mosschops and Sidewicket¹s Britain¹s Not Got Talent. So, do you want to perform on the craziest stage of all time? Have you got a talent? Have you not got talent? We don’t care, because we haven’t; so anything goes! From Dutch didgeridoo dancing to skateboarding budgerigars; panpipe duets to five-year-old Frank Carson impersonators (keep it clean please), we need you! Terms and Conditions do not apply.

And combining amazing discovery with the downright bizarre, the Science Tent is certainly not for boffins only and is definitely not to be missed! It¹s a glorious mix of science-based performances like now>press>play and Rock Guitar in 11 Dimensions, timetabled science including programming robots, 3D printing your favourite Minecraft designs, being amazed by a Rapsberry Pi and lots, lots more and drop in sessions where you can make video games with Play-doh, power an alarm clock with fruit, pre-programme a robot arm and so much more. There¹s tons to stimulate and fascinate every age group! And that includes you mums and dads!

And remember with our gargantuan music line up featuring De La Soul, Basement Jaxx, James, Johnny Marr, Sinead O¹Connor and more, plus more kids entertainment than you can shake a stick at including Mr Tumble, Horrible Histories, Ben & Holly Live and loads more, plus brand new arenas, Project Wild Thing, comedy, theatre, attractions and activities, it really is the Greatest Family Show on Earth, so don¹t miss out!

All Tickets:
– will incur a booking fee.
– are non-transferable and cannot be re-sold.