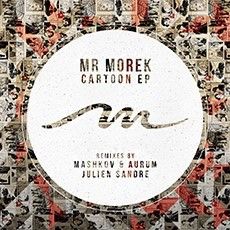 Mile End Records is a label focused on House music in all its forms. Sometimes deep, sometimes techy and always on point in terms of quality and groove. The Canadian based label set up in 2005 has released music from a number of seminal artists including Ramon Tapia, My Favorite Robot, Darius Syrossian and Glimpse who these days is perhaps more commonly known for being one half of Dense & Pika.

The labels new release features original material from Russian producer Mr Morek who with this release makes his eleventh appearance on Mile End. Having also released on Highway Records, Innocent Music and Balkan Connection amongst others, he is widely considered as an exciting new talent and one to watch.

The release also features two separate remixes, the first of which comes from Julien Sandre who has a proven musical pedigree boasting an impressive back catalogue of releases on labels including Adam Shelton’s label One Records, Get Physical, Tsuba, Morris Audio and Jamie Jones’ Hot Waves.

The second remix comes from Mashkov & Aurum who are a duo that have previously featured on Eve Records, Flux Delux and Nuwax amongst others.

The EP’s title track “Cartoon” is centred round loosely sequenced drums and a tribal groove, boasting chic and slick production. Intricate melody synths intertwine with a disco influenced lead sound and a low slung, muffled, male vocal sample that states the words “I’ll Haunt You.” The track really does stay with you like a poltergeist, hard to forget and full of surprise, but in this case for all the right reasons. Full of contrasting textures and intensity the tracks drop is the real hook. A second vocal sample builds the tension when the drums drop out, but when the drums slam back in with a thick set bass hook, the huge release of energy is enough to get any dancefloor moving.

Track two is Julien Sandre’s rework of “Cartoon” which he has titled the “Blind Remix.” Takings things deeper, he strips back the mix to let the intricate melody synths take a lead role, whilst the disco influenced sound also from the original mix provides some contrast and texture. Julien also adds movement with the addition of his own free flowing bass line. Using the vocal samples as more of a texture his mix doesn’t have the impact moments of the original and it’s more of a tool. As any experienced DJ know its tools that hold things together and provide the essential foundations of any good set.

Track three titled “Detention” is the second of the original tracks from Mr Morek. The solid House groove of the rolling bass line provides the foundation on which low frequency stabs provide menacing momentum. Brought to life with sparse percussion the tracks spacious mix is filled with ambient pads that create a spaced-out and spooky vibe. Captivating from start to finish, the track takes clear influence from timeless releases on labels like Richie Hawtin’s Minus, but with its own modern sound and individual personality.

Track Four is the Instrumental version of “Detention.” Stripping away the spooky lead synth, the space is filled with a Spanish guitar that gives the track a Latin feel, but with all of the originals charm.

The fifth and final track is the Mashkov & Aurum Remix of “Detention”. Keeping the originals stripped back sound and spaced out vibe, the duo switch things up by changing the tracks rhythm. Swapping the four-to-the-floor kick for a Breaks influenced broken beat. The changing rhythm also softens up the drums and allow the more ambient elements to take focus and lead the track. But although less energetic than the original its none the less dancefloor focused and has genre crossing appeal suited to both House and Techno DJ’s.