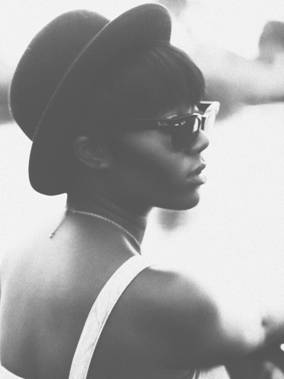 Introducing the multi-talented 22 year old singer-songwriter Ms D, who in spite of never having released a note of her own material to date has already amassed five top 10 hits to her name.

Ms D initially earned her kudos collaborating with Chipmunk, (including singing on the no. 1 smash ‘Oopsy Daisy’), before going on to become the go-to girl for Wiley’s last three hits which she co-wrote and performed on – namely, ‘Heatwave’, ‘Can You Hear Me?’ and ‘Reload’. Writing Sessions with the likes of Iggy Azalea (for whom she wrote the hook for ‘Bounce’), Conor Maynard and Rita Ora amongst others followed.

Inspired by artists ranging from Imogen Heap and Taylor Swift through to Rascal Flatts and Brandy, Ms D draws on a broad range of influences – from pop and urban through alternative and country music to film soundtracks – when writing and recording her own music.
This April will see Ms D make her solo debut with the release of her ‘Resonance’ EP on Killing Moon Records. A kalediscope of soundscapes, Resonance in an impressively diverse and emotive body of work, from the bass heavy ‘Inner City Life’ reminiscent lead track ‘My Pen’ and the movingly candid ‘I Don’t Know’ through to triumphant and melodic ‘Sunrise’,  the celtic-tinged closer ‘Goodnight & Goodbye’ and the cinematic opening track ‘Shoot Me With The Truth’, which has already been picked up on by several tastemaking blogs.

Prior to the release of the Resonance EP, Ms D will be supporting folk pop singer-songwriter Gossling on her upcoming London show, and soul legend Angie Stone for her nationwide UK tour in April.