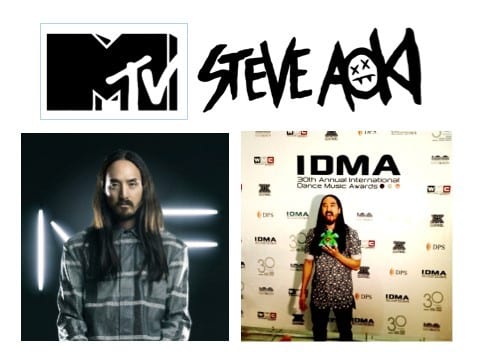 MTV Latin America has recognized one of the biggest names in music – DJ, producer and fashion executive, Steve Aoki,, with the prestigious MTV Chiuku award for his humanitarian work throughout his career trajectory benefiting numerous foundations year-around. Aoki has used his global influence, his touring events, memorabilia auctions, contests and partnerships with similar artists to raise funds and awareness for organizations dealing with medical research and humanitarian relief.

As part of MTV’s Agents of Change initiative, MTV created the “Chiuku” accolade to recognize celebrities’ who use their influence to contribute and develop special projects that bring social change to the world. The MTV Chiuku award was presented to Aoki this past Thursday, March 26 during the 30th annual International Dance Music Awards (IDMAs) in Miami Beach. Mario Cader-Frech, VP of Public Affairs and Corporate Responsibility for MTV Latin America presented the award.

“I am proud and humbled to be receiving the Chiuku award for humanitarian work. As a DJ I`ve learned that given the influence that we have on culture it is important to give back and be educators,” said Aoki. “We have the privilege to share information and build awareness for people that don’t have the same opportunities. That’s why I created the Steve Aoki Charitable Fund, to provide the awareness, the funding and to educate people about those that are less fortunate than us. I encourage everyone to do the same in their own lives.”

Most recently, Aoki was named Ambassador to Best Buddies International a non-profit organization dedicated to support young people with intellectual and developmental disabilities. And last night, MTV and Aoki brought on stage “Big Money”, a young rapper with IDD along with Anthony Kennedy Shriver, founder of BBI.

Steve Aoki is aware of the immediate humanitarian labor needed in this day and age and the essential medical research crucial to help alleviate crises around the world. In 2014, Steve Aoki’s Charitable Fund raised $65,000 from Aokify America Tour, with all proceeds going to four health and research organizations. With every ticket bought for aoki’s show a dollar was donated to the Brain Preservation Foundation, University of Rochester Medical Center’s Memory Care Program, American Brain Foundation, and Infusio. Aoki is no stranger to using his DJ power for good because in 2013, Aoki raised over $10,000 of fan contributions for Typhoon Haiyan victims through his Birthday for Relief partnership with Music for Relief in addition to a $36,000 personal donation.