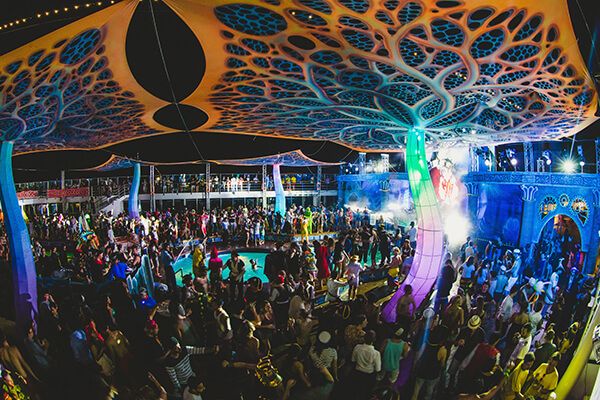 As the only festival cruise to truly incorporate art installations and comprehensive themes throughout its experience and with the announcement of its new chapter, ‘Tale of the Kraken’ setting sail in the Mediterranean, Shipsomnia has been gripping the attention of dance fans the world over. Ticket sales for the highly anticipated event are scheduled to open this Saturday Sept 3 at 12:00 pm CEST Barcelona time.

The legends of the sea come to life in this epic vacation and a giant cruise ship, Royal Caribbean’s Brilliance of the Seas, becomes a blank canvas for the creative organisers to transform into an aquatic wonderland and their festival grounds at sea.  Various art and in theme décor will fill different rooms of the ship from the grand Theater, main hall, nightclub and the main deck as their main stage.  The entire event culminates with their grand finale signature event, The Shipsomnia Ball, a carnival-like theme party where the theme is “anything ocean goes”.  Festival goers dress up for the costume ball and there is costume contest where the winners win a free balcony cabin to the next chapter of Shipsomnia and are also crowned the King and Queen of the Shipsomnia Ball.

The  organisers are proud to say that this is not a mainstream EDM festival which focuses on “Top 100” DJs but rather focuses on quality underground music in a variety of genres.  The last chapter’s line up which took place between Singapore and Thailand, featured dance music legends Pete Tong and Armand Van Helden, Claptone, hip-hop legend Jazzy Jeff and other big names such as Mat Zo, Stanton Warriors, James Zabiela, DJ Marky and Zeds Dead to name a few.

Shipsomnia has chosen the perfect route for its maiden Mediterranean voyage which is attracting travellers from across the globe to fly in for the five day adventure. Casting away from the artistic capital of Barcelona and setting sail to the music mecca of Ibiza where they will get to spend a full 24 hours in the White Isle. This leaves partygoers plenty of time for shopping, customised scenic tours, private parties at villas hosted by Shipsomnia, a beach festival and also time to experience some of the island’s best nightclubs.   Then it’s back on the ship where they continue the festivities and set sail to Sète, the “Venice of France”.