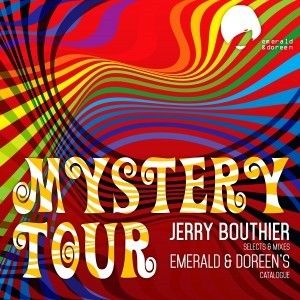 The man behind Continental records, long-time Kitsuné collaborator, half of baleariscopop act JBAG with Andrea Gorgerino, music director of Vivienne Westwood and other fashion labels, Jerry Bouthier remains a music lover without blinkers, eternally enamoured by futuristic evolutions and enthralling tunes. It is this shared gargantuan enthusiasm for truly diverse musical forms of expression, so long honesty and creativity are palpable, that naturally brought together (with the help of a chance email) and connected deeply Emerald & Doreen and monsieur Bouthier. Jerry explains:

“Out of nowhere I started to receive promos from an international cast on this hard to pin German label packing EPs of such diverse variations and remixes of the same track(s), indie-dance, balearic, electronica, ambient, house, techno… you name it. And more often than not, I would find a real gem in there.

I began to look forward to what they’d bring out next, curious and excited by the fact this label didn’t play safe or by the rules. You weren’t too sure where it belonged and what you were about to unfold, so refreshing in 2015, which is either plagued by trashy nonsense or obsessed with cool. The fact that it’d put so much emphasis on vocal songs despite staying clear of courting the mainstream and that guitars kept poking in here and there at regular intervals only made me more eager. Love guitars, and vocals, in dance music. Who ever said they had to be marginalized in the electronic era?

It eventually dawned on me, Emerald & Doreen is like a post-punk label for today’s electronic generations. Past the stage of being stuck to definitions and business plans, it offers a radically different outlook. You feel such sense of freedom, no room for limiting boundaries in E&D’s galaxy where potentially anything can happen, a rather liberating frame of mind in a world governed by ever so formulaic djs, producers and labels.

Crucially there are a lot of characters to be found here. The poppier releases stand proud for being unusually different. You instantly grasp you’re faced with the work of true musicians, self-taught or trained but often with a DIY approach, the kind who perpetually explores the unknown, dodging rules and conventions, miles away from the wanna be celebs of our shameless self-promotion era.

With such a diverse and lengthy catalogue, it took me a few long evenings to embrace the whole picture and dissect it all, gradually skimming down my selection to my very fave 21 tracks, the more generous offerings to my ears, enchanting melodies and dramatic developments firing in all directions. The order imposed itself quickly although I kept coming back at it again and again to polish the trickiest transitions and deliver a smooth, albeit slightly out there, introduction to the label. And with a slight twist too, almost like an evocative film to dance and listen to…”

So let Jerry Bouthier take you on his “Mystery Tour” of Emerald & Doreen’s soundscapes. There’s a little bit of magic for everyone in this different kind of label not devoid of nerve or humor, it is alive and here for you to discover… and cherish.