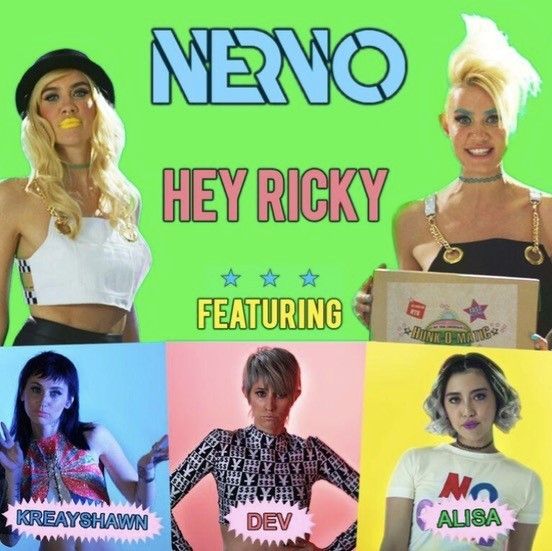 Following the release of “Rise Early Morning,” “It Feels” and “Haute Mess,” NERVO reveal the video for “Hey Ricky” – the fourth single culled from their forthcoming artist album COLLATERAL (due out this summer on Ultra Music). On “Hey Ricky” NERVO links up with rapper Kreayshawn, singer/songwriter DEV and Tokyo-based ALISA.

“Hey Ricky” is a feisty electro-pop single with quirky lyrics that’ll have you singing along. Its simple production and chiming breakdowns are juxtaposed by bubbly hooks and rap solo by Kreayshawn. The official music video – directed by Kreayshawn – is “as seen on tv” retro infomercial-inspired and features the girls dissing on the undesirable qualities of a “Ricky.”

“This is probably the most fun track on the album. Each of the girls brought their individual flavour with their badar$e vocals. It was an absolute dream working with all of them! Kreayshawn not only features but she also directed the music video – which we just love, it was fun to be able to be info-commercial hosts for a day,” NERVO says.

“Working with NERVO, Kreayshawn, and ALISA was so much fun. All of these girls have such a good energy and are very aware of themselves creatively. We all played well off each other and I think complimented each other too. I’m so excited about this record & video!,” DEV offers.

“This is my first song being featured as an artist and I’m very excited to be engaged in a creation with NERVO, Kreayshawn and Dev – people I love!,” ALISA adds.

Stay tuned for information on NERVO’s forthcoming album. To listen to NERVO’s latest releases and find out more about the DJ/Producer sisters, visit their official website and join the NERVO NATION.