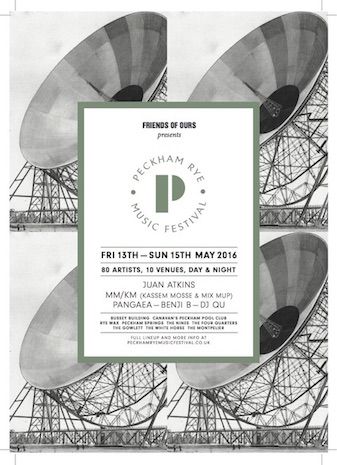 Pangaea joins the 60 strong line up on Saturday 14th May, no doubt bringing some killer cuts from both the Hessle Audio and Hadal record labels that he’s involved with.

First Word Records are hosting a Soul/Hip Hop Jam in Copeland Gallery on the Sunday. Kaidi Tatham of Bugz In The Attic fame will spin alongside Eric Lau who has supported acts such as Erykah Badu, Questlove and Robert Glasper. Ex-Scratch Pervert Mr Thing brings the skills and First Word founder DJ Gilla will set the mood for the perfect Sunday session.

Peckham based record label Ears Have Eyes promise deep, hypnotic, soulful and strange music to be discovered in Rye Wax on the Saturday John Dunk was raised in the lake district, moved down to South East London to go to uni, met three like-minded individuals and formed Junk Son. They will play live on the first floor of the Bussey Building on Saturday evening.

Peckham party guys Rigid Disco do their thing and Open Access Zone drop by from up the road in New Cross.

From Subtractive synthesis principles to live electronic performance fundamentals, CDR Knowledge will be offering PRMF attendee’s inspiration and insights into the world of music production, performance and culture on Friday May 13th.

Panels will also run, stimulating discussion and debate on topics such as 'Addressing Imbalance in the Music Industry' (hosted by Siren), and Local music enterprise' (hosted by Let's Be Brief).

Attendees will also be able to create their own hardware-based sequencing setup with the suite of Korg Volcas, as well as the classic hardware that will be available to use.

There's even space for attendee’s to create their own tracks, supported on-site by the CDR Team. In true CDR tradition, any stand out productions will be premiered during the evenings CDR session.

For more information check in at http://cdr-projects.com

Friends Of Ours comment: "We're so excited about bringing some of our favourite artists to Peckham to play alongside friends that make the local scene what it is. From the workshops we've got planned on the Friday, all-day dancing on the Saturday and the slightly more chilled plans for Sunday it's going to be a really fun weekend."

For all the latest Peckham Rye Music Festival news and additions: http://www.peckhamryemusicfestival.co.uk